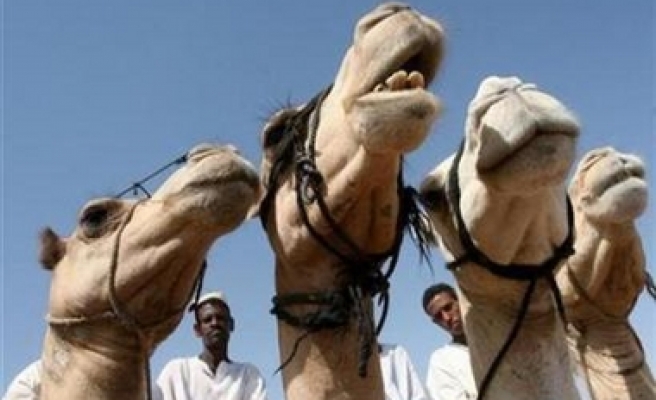 The camels burped and flapped their heads, spewing forth the partially digested contents of their stomachs as they were led by their owners to Egypt's iconic Berqash camel market south of Cairo.

As they entered the crowded market, their moaning and groaning vied with the shouts of buyers and sellers haggling over price. The animals made rumbling growls as they realized, perhaps, where their harsh journeys from Somalia and Sudan had ended.

The camels made high-pitched bleats, apparently worried that they had ended up in Egypt, which has shown little sign of stability in the three years since the ouster of longstanding President Hosni Mubarak.

Anger was palpable in the ancient camel market given the recent rise in the exchange of the US dollar -- the preferred currency for imports and exports -- vis-à-vis the Egyptian pound.

This anger was clear in the way traders treated the hapless animals.

Using different types of whips, they beat the desert beasts mercilessly: on their necks, legs -- even their swaying humps.

At this time last year, when Mohamed Morsi -- Egypt's first-ever freely elected president -- took over, the camels appeared resolved to their fate. Now, however, they moan and groan louder, often refusing to obey their masters' instructions.

Camel owners often force their animals to "sit" and "stand" to demonstrate their good health to potential buyers.

With the bad economic conditions in mind, camel owners do everything they can to attract the attention of would-be customers. But in order to force the camels to sit, they often resort to beating them into submission.

A more expensive US dollar, however, has not prevented traders from importing large numbers of the camels, especially with the Eid al-Adha holiday -- a Muslim feast commemorating Abraham's willingness to sacrifice his son Isaac -- around the corner.

Camel auctions are always held in a raised area of the market, where camels for sale are given numbers for identification purposes. Sometimes their owners' names are stamped on them so they aren't lost in the confusion.

He pointed out that camel prices had risen steadily since the 2011 popular uprising that brought down Mubarak, adding that a new president would be helpless to repair Egypt's dire economic circumstances.

"Camels are expensive in their countries of origin," said Hajj Emad. "We want the government to pay attention to us and reduce prices a bit."

"Many people," he added, "make a living from the camel trade."

For the past two years, camel traders have voiced similar grievances, with many complaining that the revolution against Mubarak had brought them few tangible benefits.

This year, however, they say their condition has become even worse as the dollar exchange rate rises further and security for most Egyptians becomes a distant dream.