Arms and drug dealers among privileged clients of HSBC Switzerland, according to investigative journalists. 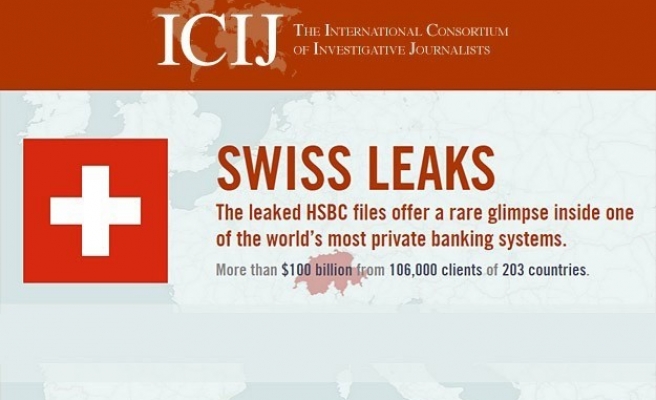 High-net-worth individuals from emerging markets are reported to have accounted for about $30 billion of the $100 billion believed to have been held by HSBC Switzerland, which is facing claims of having colluded with criminals and rich clients in tax malpractice.

A report by the International Consortium of Investigative Journalists released on Tuesday stated Venezuelan clients topped a list of the bank's customers with $14.4 billion, followed by Brazil with $7 billion, India $4.1 billion.

Egypt and Turkey were at the bottom with $3.5 billion respectively.

Markus Meinzer, a senior analyst with the Tax Justice Network in Germany, said: "Swiss banks like HSBC Switzerland made a strategic choice to target high-net-worth individuals in emerging markets.

"To compensate for a decline in the number of clients in developed markets, Swiss banks have very effectively marketed themselves in high-tax countries like Venezuela and Egypt."

Although simply having an account in a Swiss bank is not illegal in most emerging markets, using the bank to evade taxes or hide profit from activities like arms sales is.

For example, billionaire Alvaro Naboa - one of the richest men in Ecuador - owns a number of companies including Bonita bananas and he and his companies have fought many legal battles over allegations of tax evasion.

According to the ICIJ, he is connected to two accounts at HSBC Switzerland.

There is also Aziza Kulsum Gulamali, born in Burundi in 1944 and who is also known as the “Coltan Queen” for her alleged role in trafficking the precious metal, central to mobile phone technology.

The United Nations has criticized Gulamali for financing and providing weapons to rebels during Burundi’s civil war in the early 1990s.

She is connected to six bank accounts at HSBC Switzerland.

Proceeds from the sale of illegal drugs were also banked at HSBC Switzerland as well, the report showed.

In France, HSBC manager Nessim el-Maleh allegedly ran a cash pipeline in which plastic bags full of currency from the sale of marijuana to immigrants in the Paris suburbs were collected and taken round to HSBC’s respectable clients in the French capital.

Bank accounts back in Switzerland were manipulated to reimburse the drug dealers, according to the ICIJ.

HSBC has been charged with handling money from drug sales in the past.

The bank paid a $1.9 billion settlement to end a court case in 2012 which alleged the bank was involved with drug cartels and arms dealers laundering money in North America.

The ICIJ investigation was based on files stolen in 2007 by Hervé Falciani, a former employee of the bank who fled to France.

Falciani, who has recently been drafted by the PODEMOS party in Spain to analyze the country’s fiscal system, was at first charged with breach of banking secrecy in Switzerland – but the charges were later dropped.

But the files he took with him have been turned over to fiscal authorities in France, Switzerland, the UK, Belgium, Denmark and the U.S., as well as leaked to major news outlets around the world.

National tax authorities have already filed charges against some of the HSBC Switzerland clients.

In Belgium, an investigation is under way, although lawyers in the country have pointed out that the Swiss legal system makes it difficult to show guilt – tax evasion in other countries is not illegal in Switzerland, only tax fraud is.

In France, charges have also been filed against some clients.

Prime Minister Manuel Valls, said he was determined to fight tax evasion and would continue to take action at home and on a European level.

In the U.K., a parliamentary investigation is under way.

The chief of the tax authority HMRC told parliament on Tuesday that it had a “long-standing approach” to pursuing tax evasion.

But Margaret Hodge, chair of the public accounts committee, blamed HMRC for being "weak" on tax evasion.

She said in a TV interview: “You are left wondering, as you see the enormity of what has been going on, what it actually takes to bring a tax cheat to court.

"If it had been a benefit cheat, it would have been up for court years ago.”

Hodge pointed out that only one client of HSBC Switzerland has been charged, while U.K. clients accounted for the largest amount of deposits in HSBC Switzerland of any one country, at $21 billion.

HSBC said in a statement on Tuesday that the international bank, the second-largest in the world, had not managed to impose in the Swiss arm - which it purchased in 1999 - the same standards of ethics that it had in most countries, as the corporate culture was different at the Swiss bank and non-compliant conduct had been tolerated.

HSBC said it was working to raise  the standard of compliance at all its banks around the world and was cooperating entirely with authorities investigating the scandal, dubbed SwissLeaks.

The Tax Justice Network blames developed countries for not enacting the necessary legislation to crack down on offshore tax evasion of the type clients of HSBC Switzerland engaged in.

"It's one among a lot of very big players. These banks get away with it because obtaining information about clients’ affairs is made difficult, as there is almost no transparency.”