Pentagon officials say the F-35 is finally making progress after several major restructurings and years of delays, but also say the jet still has 40 percent of developmental testing to go. 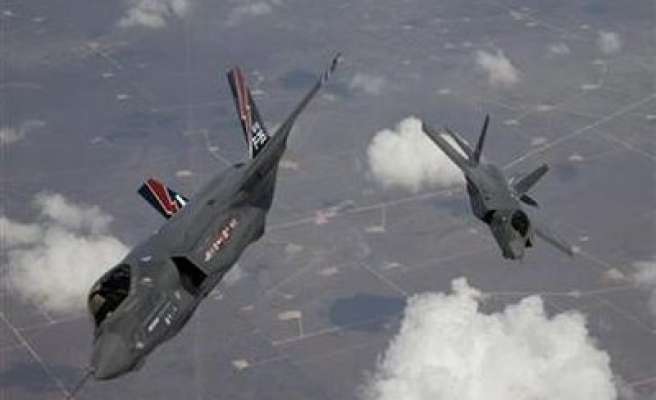 Borne of the last downturn in U.S. military spending in the 1990s, Lockheed Martin Corp's F-35 Joint Strike Fighter was intended as a quick and affordable way for the United States and its allies to replace thousands of aging F-16s and other warplanes while avoiding the pitfalls of earlier programs.

Nearly two decades and a $166 billion jump in projected costs later, the world's largest arms program was poised for a high-profile international debut at two British air shows when the Pratt & Whitney engine on one of the jets broke apart and caught fire during a takeoff from a Florida air base.

The incident has grounded the existing fleet of 97 F-35 jets and triggered a fresh wave of criticism about the costly new warplane, although U.S. and British officials are underscoring their continued commitment to the program, which now has a revised price tag of $398.6 billion.

The latest engine issue came weeks after an in-flight oil leak that sparked a brief grounding in June, but U.S. officials remain hopeful the jet will at least fly at the bigger of the two UK events - the Farnborough Airshow that starts on July 14.

Lockheed's F-35 program manager Lorraine Martin told reporters that the planes would miss the first day of the Royal International Air Tattoo air show, but could still arrive in time to fly at the event, which continues through July 12. She said Lockheed had spare parts on hand at the air field in case they were needed.

British Defence Secretary Philip Hammond on Wednesday said the F-35 may miss the Air Tattoo given the grounding order, but said he was optimistic that the plane would fly at Farnborough.

It would be a huge embarrassment if it misses that show too, and could undermine export interest in the jet just as several countries including Canada and Denmark, both of which helped fund development of the jet, are weighing F-35 orders.

With three different models, supersonic speed and cutting-edge electronics, the F-35 was designed as a multi-service, multi-national program to lower development and production costs. Yet early technical challenges drove the cost of the program nearly 70 percent over initial estimates.

Pentagon officials say the F-35 is finally making progress after several major restructurings and years of delays, but also say the jet still has 40 percent of developmental testing to go.

The sheer complexity and scale of the program, which involves three U.S. military services and 9 other countries that have placed firm orders, also mean that grounding and technical issues have a far wider impact than on a single-service weapon.

Lockheed is developing and building three models of the F-35 for the U.S. Air Force, Navy and Marine Corps, and a growing number of countries.

Analysts say the latest technical issue underscores the danger of starting production of a new weapons system before all testing is finished, a practice known as "concurrency".

Frank Kendall, the Pentagon's chief arms buyer, has called that approach "acquisition malpractice", and is putting in place reforms to avoid similar problems on other weapons programs.

The Pentagon recently lowered its estimate for the cost of concurrency - or retrofitting existing F-35 jets to correct design problems - but officials warn that new issues can always crop up, such as the June 23 incident in Florida.

"Engineering discoveries are a normal part of this and every other aircraft development program. Some of them are relatively insignificant, and others more concerning, but with each test event and every training mission we are learning and constantly improving," said U.S. Air Force Lieutenant General Christopher Bogdan, who runs the Pentagon's F-35 Joint Program Office.

The F-35 program is still in development, but the airplanes are already being used for training and some operations, and the Marine Corps plans to start using them in combat from July 2015.

Marine Lieutenant General Jon Davis, deputy commandant for aviation, reiterated those plans in a statement to Reuters, noting that the jet's capabilities would "revolutionize the way the Marine Corps projects power from the sea and the shore".

But he said the Marine Corps would not declare an "initial operating capability", or IOC, next year if any capability defined in its requirements was not delivered.

Bogdan provided no details on the investigation into the engine incident, but said he was confident in the plane's design and operation given its "increased maturity and stability".

He said everyone involved in the F-35 program was working "day and night" to try to understand the cause of the engine failure, and safety remained the program's top priority.

A strictly controlled U.S. Air Force investigation into the engine failure continues, which means U.S. government and industry officials are more tight-lipped than ever.

But questions are emerging about quality control issues at Pratt, which faced problems with fuel lines last year.

"This could have serious consequences for Pratt unless they can say without a doubt why this part failed, and can convince the Joint Program Office that this was a one-off thing," said one defense official who was not authorized to speak publicly.

The program's complex structure - with jets already owned by three different military services and two foreign countries - has also revealed the need to better coordinate any moves by "airworthiness" authorities to suspend flights.

In this case, the Air Force launched its standard safety investigation procedures after the engine incident, quarantining the jet and locking out the other services, as per its protocols. But that left many questions unanswered for the other military services and global partners on the program.

The Pentagon is expected to revamp the process to ensure better coordination in the future, said multiple sources familiar with the program.