Erdoğan complained of claims that a series of recent meetings to assess economy policies were a sign of crisis in the Turkish economy, apparently referring to statements from the opposition. 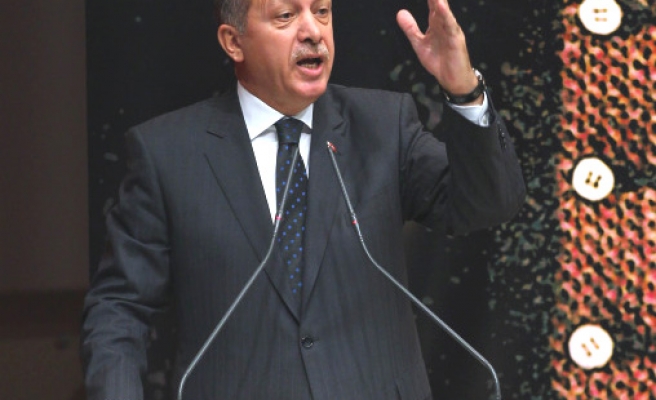 Prime Minister Recep Tayyip Erdoğan dismissed once again prospects for damage to the Turkish economy from global economic troubles and said the Turks should not cut spending, although this did not mean they should waste their resources either.

"The global crisis will not even touch Turkey this time," Erdoğan said on Wednesday, reiterating an earlier statement to that effect. "Crisis mongers will feel ashamed," he stated at a meeting of his Justice and Development Party (AK Party).

Erdoğan complained of claims that a series of recent meetings to assess economy policies were a sign of crisis in the Turkish economy, apparently referring to statements from the opposition. He said those who make such claims were acting "irresponsibly."

The prime minister also warned against excessive spending, saying households able to afford moving from their rented house to a house of their own should do so, advising them to give such a move preference over buying a car. Current house owners should refrain from wasting their money on luxury homes.

The Office of the Prime Minister released a statement on Tuesday that said, "Turkey's economy and financial markets are unlikely to suffer a long-term impact from developments rocking global markets," which came after days of sharp declines in emerging markets, including Turkey, due to growing risk aversion among investors.

Turkey will maintain its fiscal discipline, pursue policies to increase employment, improve investment conditions and follow its privatization program, the statement said, which was prepared after Erdoğan's meeting with his economic team.

"The past week many stock exchanges witnessed huge losses while the risk premium skyrocketed. The currencies of developing countries in particular have depreciated against the dollar. Since our country is integrated with the world's economy in fields like trade, investment and financial activities, it is inevitable that Turkey will be affected by the economic developments around the globe in the short term.

In this context, the negative effect of current economic developments has been reflected in Turkish stocks and the lira," the statement said. "However, we don't expect any long-lasting and permanent negative effects to the Turkish economy thanks to strong political stability and macroeconomic indicators."

Global market turmoil erupted as investors dumped riskier assets, rushing to hide their cash in treasuries and gold at a time of growing fears that the United States may slide back into a recession and the debt crisis in a number of eurozone countries may spread to larger member states Italy and Spain.

Higher-than-expected inflation data from China also added to investor concerns, with the US slowing and losing its prized AAA credit rating before the weekend and Europe reeling under a staggering debt crisis. Losses at the İstanbul Stock Exchange (İMKB) were also substantial as it lost over 15 percent of its value from Thursday until Tuesday.

The statement also said that Turkey will focus on the rapid implementation of structural reforms to permanently solve the current account deficit (CAD) problem, adding that the rise in CAD emerges from the current situation of the global economy.

"In the coming period, the government will focus on enhancing the environment for investment, continue its policy on creating employment, combat the unregistered economy, complete works on the 'Export-Based Production Strategy,' take steps to decrease the foreign dependency on energy and adopt more measures that will enable more research and development activities in the country," the statement said.

Turkey's CAD spiked to 8 percent of its gross domestic product (GDP) -- $37.3 billion in the first five months of this year -- as the country failed to reduce the dependence of its industries on foreign intermediate goods and because of rising oil and natural gas prices, increasing its energy bill, paralleling its economic growth.

Despite this, Turkey tries to increase its exports to decrease the foreign trade deficit, an element of the CAD. The more Turkey exports, the more it has to import intermediate goods in order to produce its products. Moreover, as the country does not have sufficient energy resources to meet domestic demand, it is highly dependent on energy from international markets. This is also a structural problem since Turkey's energy imports will increase as the manufacturing industry's gears up production.

Like the statement said, Turkey urgently needs to focus more on the rapid implementation of structural reforms such as creating more domestic energy resources and paying more attention to the production and export of products with high value-added to the economy by boosting R&D-related manufacturing.