Erdogan: Turkey to be strategic in energy transmission-UPDATE 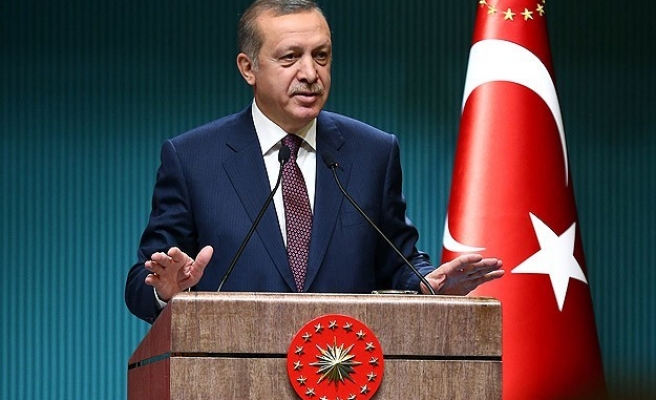 Turkey wants to exploit its strategic position between energy-rich countries and those who need these resources, the Turkish president on Tuesday.

Speaking at the Energy Markets Summit in Ankara, President Recep Tayyip Erdogan said that Turkey is a bridge between regions that have abundant energy resources and countries which need those resources.

"Ensuring the safe, reliable and economic transmission of energy resources is as strategically important as having those resources,"Erdogan said.

"We want to use our central position between the east-west and north-south corridors in the most active and productive way," he added.

Erdogan said that Turkey needs to invest $120 billion in energy projects through 2023, in accordance with its economic growth. Turkey's increasing development in the past 12 years has created new energy needs, he said.

"We have now doubled our electricity consumption, and this will quadruple in 2023, compared with 12 years ago," Erdogan said.

"We have initiated projects to use hydroelectricity and coal resources more efficiently," the Turkish president said. Turkey is placing more emphasis on wind and solar energy as well, he said.

"The private sector's share in the installed capacity of electricity has risen from 32 to 72 percent today, and continues to increase," Erdogan said. Turkey has Europe's second- and the world's fifth-longest electricity network at 1.2 million kilometers (745,000 miles)."

President Erdogan also said that the European Union could not specify any shortcomings of Turkey in the energy chapter.

"Despite the important levels we have reached in energy, one of the deadlocks we have with EU is the energy chapter," he said.

Erdogan said that the construction of the Trans-Anatolian Natural Gas Pipeline will begin in March, and that the first gas deliveries can be expected by 2018.

TANAP is to transport natural gas from Azerbaijan through Turkey to Europe, where it will join the Southern Gas Corridor.

On the issue of Cyprus, Erdogan reiterated Turkey's support for the Turkish Republic of Northern Cyprus.

"We will support the TRNC, and will not give up our policy due to Greek Cypriots' unjust and non-reconciliatory behavior," he said.

The Greek Cypriot administration put peace talks on hold in early October 2014 after Turkey sent a research ship to explore oil and gas reserves off the island's southern coast.

Turkey has said that the natural resources of Cyprus belong to the whole population of the island, and should be shared among them equally.

- Energy for peace and prosperity

Defining energy as "one of the civilized means that create inequality" in the world," Erdogan said that 1.3 billion people do not have access to electricity, while 800 million Africans' electricity consumption is equal to that of New York City.

Erdogan said that underdeveloped countries should be prioritized for energy investments to reduce poverty and inequality.

"We want to play a constructive and leading role in turning energy into a resource of wealth and prosperity, instead of one that causes disputes and destruction," he said.

"We will do our best to make oil and gas the instruments of peace and prosperity," he concluded.