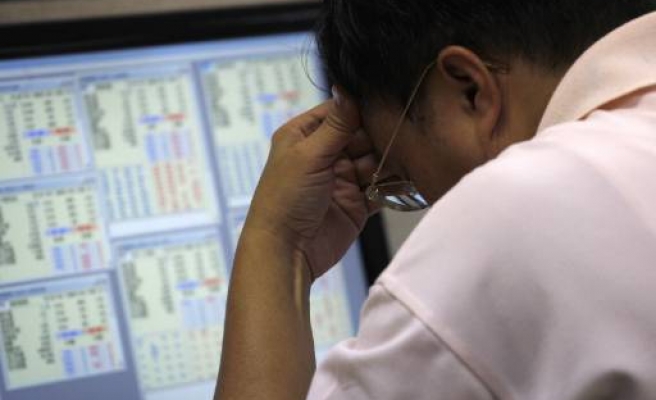 The leaders of Germany, France and Spain will hold crisis talks about Europe's spiralling debt crisis on Friday after China and Japan called for global policy cooperation following a market rout.

Despite demands for action, the European Central Bank offered only limited help and told Italy and Spain -- now under heavy fire -- to take tougher austerity measures before it will step in to buy their bonds.

The call from China and Japan, Washington's two biggest foreign creditors, highlighted fears that Europe's debt crisis could spin out of control and the U.S. economy may go into reverse, worries which have wiped $2.5 trillion off the value of world stocks this week.

Their comments were echoed by European Economic and Monetary Affairs Commissioner Olli Rehn.

"International policy coordination through the G7 and G20 is of critical importance," he told a news conference, having broken off his vacation and returned to Brussels.

"Some of the reasons for these tensions relate to developments outside the euro area. Investor sentiment has been negatively affected by the impact of the debt ceiling negotiation in the United States and by recent data suggesting a softer patch in the global economy."

Non-euro member Britain said it was in touch with euro zone leaders and the Group of Seven leading industrial powers.

The ECB reactivated its dormant bond-buying programme on Thursday in an attempt to hose down the euro zone's deepening sovereign debt crisis, but only bought Portuguese and Irish debt. Influential members of the ECB opposed even that.

That widened a damaging rift that first appeared last year when Weidmann's predecessor, Axel Weber, publicly dissociated himself from the policy. This time, ECB chief economist Juergen Stark and the Dutch and Luxembourg central bankers also dissented, the sources said.

Governing council member Luc Coene of Belgium said the policy-setting body had not vetoed buying Italian and Spanish bonds but both countries would have to take further action to earn central bank support.

"I certainly think the central bank is ready to take significant measures to help the situation," the Belgian central bank governor said. "But first countries need to take measures."

"Recent developments mainly reflect an increasing scepticism about the systemic capacity of the euro area to respond to the ongoing crisis," Greek Prime Minister George Papandreou wrote in a letter to European Commission President Jose Manuel Barroso, echoing an assessment from Barroso himself earlier this week.

Investors said policy differences among European Union governments and central bankers were heightening anxiety about Europe's will to stem the debt crisis.

To bail out Spain would test the fund's existing firepower to the limit while doing so for Italy would overwhelm it but Rehn insisted neither would require assistance.

"In Europe, central banks and governments are not marching in step," said Georg Schuh, chief investment officer of Deutsche Bank's <DBKGn.DE> asset management arm DB Advisors, adding that the next four to six weeks would be crucial.

"I agree that these subjects should be discussed," he told reporters a day after Japan intervened to sell yen. "Each problem is important, but how to prioritise these issues is something to discuss from here on in."

Japan sold yen on Thursday to try to cap the currency's rise. It has become a popular safe-haven bet, as has the Swiss franc, as concerns about the United States and Europe grow.

Yang, who is visiting Poland, called on the United States to adopt "responsible" monetary policies and protect the dollar investments of other nations.

The U.S. Federal Reserve holds its next policy-setting meeting on Tuesday, and economists say there is little more it can do to try to spur growth. IHS Global Insight said there was a 40 percent chance the United States could slip into recession.

Meanwhile, investors are worried that Italy and Spain, the euro area's third and fourth biggest economies, could be next to require bailouts after Greece, Ireland and Portugal.

Analysts said they would look to see if European leaders are willing to expand its emergency financial stability fund to an amount that would put a floor under the market panic. Currently at 440 billion euros, it would need to be doubled or tripled to cover economies as big as Italy and Spain.

"To be effective, the EFSF needs to be credible and respected by the markets. And therefore we need to be continuously assessing it, once up and running in its objective form, with these goals in mind," he told BBC radio.

Voicing a personal view not shared by all his ECB colleagues, Coene also said Europe should move in the direction of common European bonds.

"You need to bring all of these problems of sovereign debt to the European level. We will never get out of it if we leave that at the national level," he said.

EU heavyweights Germany and France have so far opposed any common debt issuance, arguing that it would remove a key driver of fiscal discipline in individual member states and push up their own borrowing costs as AAA-rated sovereigns.

In Washington, a similar sense of inertia has taken hold.

Just days after a bitterly fought, last-minute deal to raise the country's debt ceiling and avoid default, realisation has sunk in that many elements of the $2.1 trillion deficit reduction plan are not locked in place.

Doubt has spread through markets that Congress will stick to implementing it in full after the November 2012 elections.

U.S. employment numbers due out on Friday will be critical to market sentiment. Forecasts are for a tepid 85,000 jobs added in July, but a weak number or even contraction would boost concern that the United States is heading into recession.