EU to ease sanctions on Zimbabwe

The EU is expected to announced next week that sanctions will be suspended on eight of the 10 Zimbabweans affected by asset freezes and travel bans in recognition that the country has made some progress in reforming. 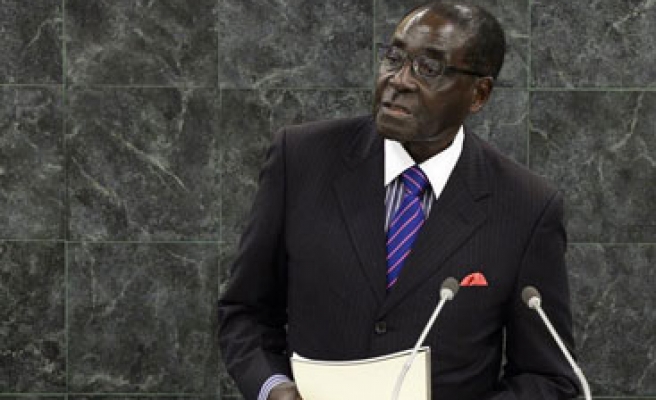 The European Union is to further ease sanctions on Zimbabwe next week, but will keep a travel ban and asset freeze on President Robert Mugabe and his wife, EU sources said on Tuesday.

But the EU has held out an olive branch to Mugabe, inviting him to take part in an EU-Africa summit inBrussels in April and granting him an exemption from sanctions to visit Europe.

The moves reflect a cautious easing of EU policy towards Zimbabwe 12 years after it first imposed sanctions in protest at human rights abuses and violations of democracy under Mugabe, who has ruledZimbabwe since independence from Britain in 1980.

EU states were divided in their response when Mugabe, 89, won a fifth term as president in an election last July that was endorsed as free by African observers but denounced as fraudulent by the opposition.

The overhaul of the EU's policy, after a review, is designed to encourage positive change in Zimbabwewhile retaining some leverage over Mugabe to pursue reforms.

"It does seem a time to move forward and the sense is that Zimbabwe is moving ... We need to respond," EU foreign policy chief Catherine Ashton said in the European Parliament on Tuesday in response to a question about easing sanctions.

"I think we probably are now in the right place to do this on the basis that if things go badly we can move back again," she said.

EU sanctions on Zimbabwe are renewed annually and are due for review by Feb. 20. The EU is expected to announced next week that sanctions will be suspended on eight of the 10 Zimbabweans affected by asset freezes and travel bans in recognition that the country has made some progress in reforming.

EU officials have described the eight as "key decision-makers" in Zimbabwe.

However, Mugabe and his wife Grace will remain under sanctions for a further year, EU sources said.

The EU will keep its arms embargo on Zimbabwe and Zimbabwe Defence Industries, an arms supplier, will also remain under sanctions, the sources said.

Sanctions on scores of people and companies that were previously suspended will remain suspended.

Zimbabwe may be in line to receive some funding from an EU aid fund for developing countries for the period until 2020.

For years, the EU stopped channelling development aid through the Zimbabwean government and worked instead with charities, but it will now talk to the government about how to spend aid money.

Zimbabwe, shunned by Western governments and funding institutions, needs $27 billion - more than twice the size of its economy - to fund a five-year plan to improve basic services and rebuild the impoverished country, a senior government official said last week.

Mugabe's ZANU-PF party has long demanded the complete removal of EU sanctions it denounces as illegal.

An EU source said Mugabe had not yet replied to the invitation to join other African and EU leaders at the Brussels summit in April.

The EU has gradually eased sanctions on Zimbabwe for several years to reward it for political reforms under the previous coalition government in which Mugabe shared power with his political rival Morgan Tsvangirai.

What a horrible mistake.Mugabe just rigged the polls the other day.Bad, Bad decision.

Giving Mugabe succorfhhGj is akin to supplying a junkie with drugs thinking your helping?