EU tries to cope with the 'high unemployment rate'

The European Union spent its past 5 years, dealing with public debt and budget deficit. And despite all efforts, the EU couldn't get rid of the effects of the economic recession 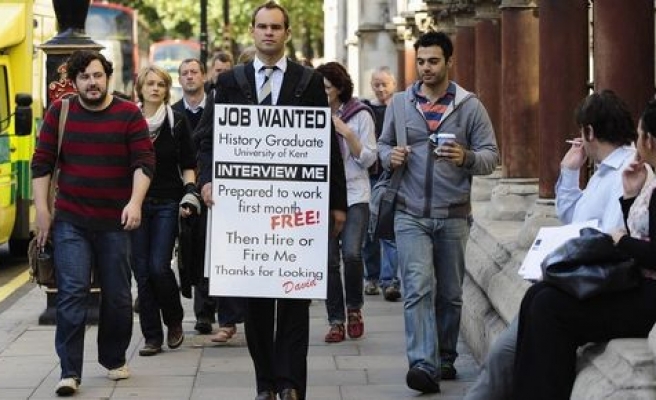 "High unemployment rate" became the sharpest zone for the EU to come with nowadays.

According to the Turkish Statistical Institute TurkStat data that the unemployment rate in Turkey became 9.2 percent as the end of 2012 and according to the calculations of Eurostat, it was seen as 8.1 percent.

The European Union spent its past 5 years, dealing with public debt and budget deficit. And despite all efforts, the EU couldn't get rid of the effects of the economic recession. Among all these structural issues, one of the most important problems is tend to be the high rates of unemployment.

From the crisis point of view, the unemployment rate was focused especially in Greece, Spain, Portugal, Ireland and Italy. Moreover, the situation does not change much in the cornerstones of the union, France and Britain.

When tracking the highest unemployment rate based on countries, Greece leads with 26.8 percent as of March, followed by Spain with 26.6 percent, Portural with 17.6 percent, Greek Cypriot administration with 15.1 percent, Ireland with 13.6 percent and France with 10.4 percent.

On the other hand, Austria holds the lowest unemployment figures in the EU with 4.9 percent. Germany, the largest economy in the union, was noted with 5.4 percent when it comes to their unemployment.

Director of Economics at the SETA, foundation for Political, Economic and Social Research, Erdal Tanas Karagol reminded that when the youth unemployment was examined in the EU, the number was peaking to 50 to 60 percent in some countries and added, "When we examine it in Turkey, the economic growth in the country drops the rate of youth unemployment. 18-19 percents are much better when compared with 60 percents."