EU will not ease Russia sanctions amid Ukraine crisis

EU’s relations with Russia can only change if the Minsk agreement is implemented, says EU foreign policy chief Federica Mogherini. 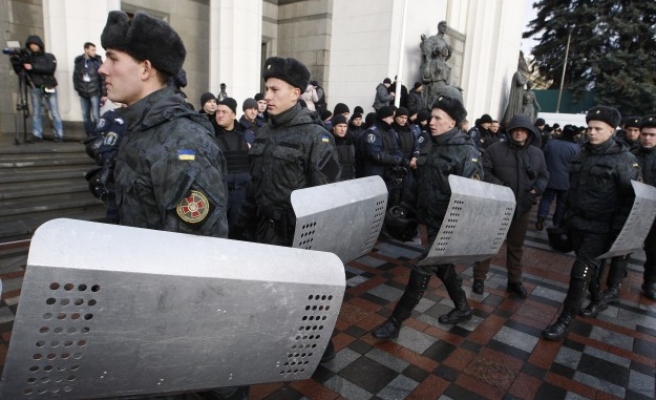 European Union foreign ministers said on Monday there were no grounds to lift economic sanctions against Russia despite conciliatory proposals from the EU's foreign policy chief, as violence intensified in Ukraine.

Federica Mogherini had suggested in a confidential memo seen by Reuters that EU governments could start talking to Russia again about global diplomacy, trade and other issues if Moscow implemented the Minsk peace agreement to end the separatist conflict.

"In light of the current events in eastern Ukraine, no one had the idea of loosening the sanctions," German Foreign Minister Frank-Walter Steinmeier told reporters after talks among EU ministers.

With attempts to restart peace talks stalled, rebels have stepped up attacks in the past week. Fighting raged around Donetsk airport on Monday.

Mogherini's proposals were met with suspicion by some EU countries that feared they would send the message to Russian President Vladimir Putin the EU's resolve was weakening.

Mogherini denied the EU was contemplating any U-turn in its policy towards Russia.

"There is no normalisation, there is no 'back to business in usual' in any way. There is a reflection on how to use in the best possible way our tools, our role," she told a news conference.

The EU's relations with Russia could only change if and when the Minsk ceasefire accords for Ukraine were implemented "and ... the latest developments on the ground are definitely not encouraging, rather the contrary", she said.

EU ministers will continue their "strategic reflection" on relations with Russia in the run-up to a meeting of EU leaders in March.

The EU has joined the United States in imposing tough sanctions on Russia over its alleged support for the pro-Moscow rebels in Ukraine but the bloc's 28 member states vary in their enthusiasm for the measures.

Sebastian Kurz, foreign minister of Austria, on the dovish side of the debate, said the EU should draw up a strategy to put relations with Russia back on a firm footing in the long term. "It's not about sharpening or easing sanctions, it's about coming away from pure reaction ... I think it's false only to be reactive," he told reporters.