The United States' newest combat jet had already been pulled out of a British military show last week, after the entire fleet was grounded following a massive engine failure 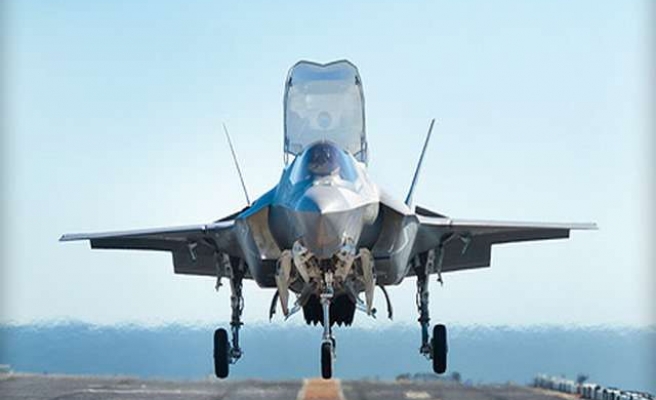 The engine failure that has grounded the entire fleet of Lockheed Martin Corp F-35 fighter jets was caused by "excessive" rubbing of fan blades in the plane's Pratt & Whitney engine, but does not appear to be a fundamental design flaw, the Pentagon's chief weapons buyer said on Sunday.

Defense Undersecretary Frank Kendall told reporters on Sunday there was still a chance that the grounding order could be lifted in time for the F-35 to make its international debut at the Farnborough air show.

Organisers of the show confirmed that the F-35 would not appear on Monday, but said it could still arrive and fly later in the week.

The United States' newest combat jet had already been pulled out of a British military show last week, after the entire fleet was grounded following a massive engine failure on a U.S. Air Force F-35 at a Florida air force base on June 23.

Kendall said the grounding had halted testing but he did not view the incident as a "fundamental setback" for the $400 billion program, the Pentagon's biggest, which still has about 40 percent of developmental testing to complete.

He said the engine had suffered two issues involving fan blades in the past few years, but they appeared unrelated and not systemic to the airplane.

"None of those things that have happened, including this recent one as far as I know, suggests that we have a fundamentally flawed design," Kendall said.

He said detailed inspections of engines on the fleet of 97 F-35s already built had not shown signs of the kind of excessive rubbing founded on the engine that broke apart, although there were signs of milder rubbing in several other engines.

Kendall said the evidence being compiled did not point to a systemic issue, but the analysis was still going on. In this case, engineers found evidence of significant rubbing by the fan blades against a cowl.

"We're not noticing it throughout the fleet," he said. "The design allows for a limited degree of rubbing, but it was enough in this case to cause a structural reaction that ultimately led to failure."

Bennett Croswell, president of Pratt & Whitney's military engine business, declined comment on any details about the engine failure and what caused it.

Marillyn Hewson, chief executive of Lockheed Martin, said it was disappointing that the jet had not flown in Britain thus far, but the company stood ready to support the jet if flights were allowed to resume.

She said military officials from other countries were supportive of the process now under way.

"People who understand the nature of development take this in stride as normal discoveries in development," Hewson said.