Fewer than 7 pc of violence-hit firm in S.Africa 'working'

That total includes 34 striking workers killed at once in a hail of police bullets, stiffening the resolve of surviving comrades to hold out until their demands are met. 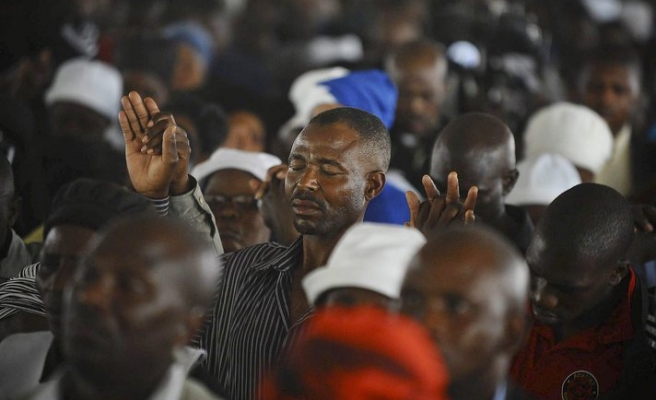 Fewer than 7 percent of Lonmin's 28,000-strong South African workforce reported for duty on Thursday, as the platinum producer held talks with warring unions aimed at cooling tensions and bringing people back to work.

The world's third-largest platinum producer has had its mining operations shut for almost three weeks because of a violent turf war between the established National Union of Mineworkers (NUM) and militant Association of Mineworkers and Construction Union (AMCU) that has killed 44 people this month.

That total includes 34 striking workers killed at once in a hail of police bullets, stiffening the resolve of surviving comrades to hold out until their demands are met.

"We have a 6.6 percent average attendance across all shafts this morning," Lonmin said in a statement on Thursday.

The talks to end the impasse in the platinum mining city of Rustenburg northwest of Johannesburg resumed on Thursday after dragging into the night on Wednesday.

Gideon du Plessis, deputy secretary general of trade union Solidarity, said discussions are to secure "a return to work agreement - with the aim of getting workers back to work on Monday after most funerals have been concluded."

He said the grievances raised by the striking workers would then be dealt with and finally, a "peace accord" would be reached.

Solidarity represents skilled workers and its members have not been on strike but all unions are taking place in the talks.

The 3,000 strikers who have brought things to a standstill are mostly rock driller operators demanding a monthly wage of 12,500 rand ($1,500), which would be a hike of over 25 percent of what the company says it currently pays, excluding bonuses.

In Australia, South Africa's mines minister Susan Shabangu said on the sidelines of a mining conference in Perth that the violence was undermining investor confidence in Africa's largest economy, which sits on 80 percent of known platinum reserves.

"It is a cause for concern. The tragedy does impact on any potential investments. Any investor would like to invest in a stable environment, we've got to recognize that," she said.

Lonmin accounts for 12 percent of the global output of platinum, used in car catalytic converters and jewelry.

Lonmin has said it may issue new shares to shore up a balance sheet hit by lost output and revenue, and the prospect of further losses as the entire platinum sector struggles with soaring power and labor costs and poor demand.