President Hugo Chavez promised a full investigation into the tragedy during an emotional visit to the scene on Sunday. 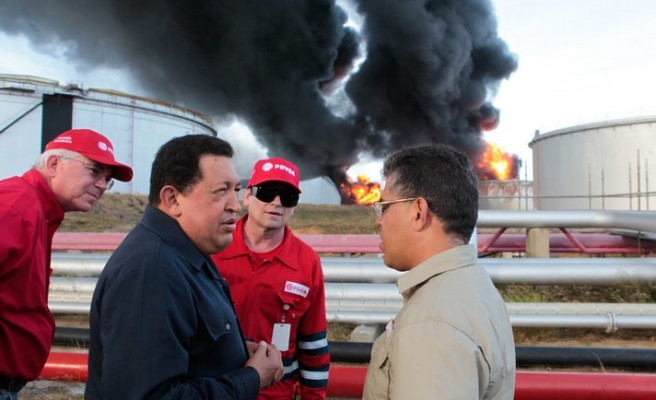 A fire burned for a third day in two fuel storage tanks at Venezuela's biggest refinery on Monday, putting in doubt plans to restart the facility quickly after one of the world's most deadly oil industry accidents.

Energy Minister Rafael Ramirez told state TV the blaze remained contained to the storage tanks. He has insisted that the Amuay refinery can be restarted within two days, once the flames have been extinguished.

A gas leak caused an explosion and then a fire before dawn on Saturday at the 645,000 barrel-per-day facility, part of the world's second biggest refinery complex - obliterating homes nearby, killing at least 41 people and wounding dozens more.

State oil company PDVSA said that none of Amuay's production units was affected, and that Venezuela has enough stocks to meet its commitments to the domestic market and keep up exports.

President Hugo Chavez promised a full investigation into the tragedy during an emotional visit to the scene on Sunday.