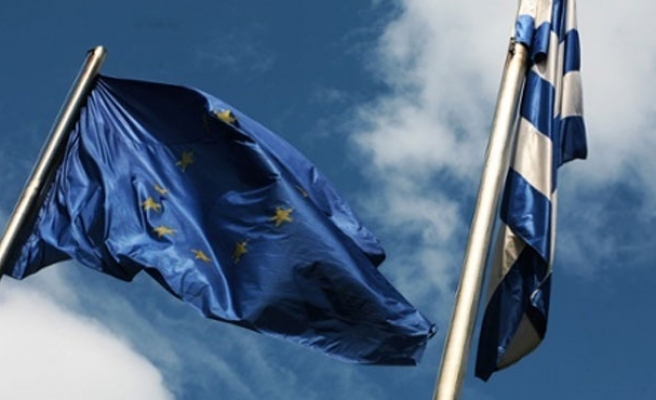 Debt-laden Greece and EU paymaster Germany struck hardline postures ahead of a crucial meeting of euro zone finance ministers on Monday on the future of an unpopular international bailout for Athens, but France called for compromise.

German Finance Minister Wolfgang Schaeuble maintained a typically tough line, telling German radio Greece had lived beyond its means for a long time and there was no appetite in Europe for giving it any more money without guarantees.

French Finance Minister Michel Sapin hinted at a slight easing of euro zone opposition to Greek requests for an end to austerity and a new debt deal, saying Europe must respect the political change in Athens.

Radical leftist Greek Prime Minister Alexis Tsipras's government was elected last month on a pledge to scrap the bailout, reverse austerity measures and get rid of supervision by the hated "troika" of the European Commission, the European Central Bank and the IMF.

Greece's euro zone partners to date have shown little desire to cut Athens any slack on the austerity demanded in return for some 240 billion euros ($274 billion) in financial assistance.

If Monday's meeting ends in a breakdown, Greece could be headed for a credit crunch that could force it out of the euro zone. Progress, however, could mean further negotiations, perhaps later in the week.

Government spokesman Gabriel Sakellaridis showed no sign that Athens was backing off from its core demands. "The Greek government is determined to stick to its commitment towards the public ... and not continue a programme that has the characteristics of the previous bailout agreement," he said.

Tsipras had a late telephone call with European Commission President Jean-Claude Juncker on Sunday, whose office said the EU chief executive was "making a last effort in an extremely difficult situation".

Speaking on France 2 television, Sapin took a much softer line than has been heard from the euro zone in recent weeks, saying that there was "fortunately" some chance of a deal. He appeared to be positioning France to try to broker a compromise.

Sapin said Germany had a point in insisting that Greece stick to commitments made to its creditors, but Athens was justified in saying the Greek people had mandated the new government to pursue a different policy.

"Greece must respect European rules... be we must respect the Greek people's vote. There is a new policy and we must help Greece put this policy in place," he said.

There was no such flexibility from Schaeuble.

On Deutschlandfunk radio, he said he was sceptical there would be a deal on Monday and that the Greek government was behaving "quite irresponsibly".

Bank deposit outflows in Greece have picked up as negotiations have shown little result. The ECB has authorised emergency funding for banks by the Greek central bank so far, but a failure in the talks could mean the imposition of capital controls.

Euro zone member Cyprus was forced to close its banks for two weeks and introduce capital controls during a 2013 crisis. Such controls would need to be imposed when banks are closed. Greek banks are closed next Monday for a three-day weekend marking the start of Orthodox Lent.

The ECB will review its policy on Wednesday in the light of the Brussels talks, but an ECB source said it was unlikely to pull the plug on Greek banks as long as the terms of a future programme were still under discussion.

Greek bond yields inched up on Monday but investors remained cautiously optimistic that Athens would reach a new debt deal with its European partners later in the day.

The chief executive of Morgan Stanley bank, James Gorman, said he believed the likelihood of Greece negotiating a debt restructuring were greater than the country being forced out of the euro. He also doubted that the monetary union was in danger.

"I believe a euro zone break-up is highly unlikely, for reasons that go beyond the economy... but if a country leaves the euro, this will not mean the end of the monetary union," he told Italian daily la Repubblica.

Tsipras has requested a bridge programme to be put in place for a few months while a new debt relief deal is agreed to replace the existing bailout, which has already forced drastic cutbacks onto ordinary Greeks.

The current programme expires at the end of the month. A Eurogroup meeting last week ended without progress, although technical talks were later agreed and took place over the weekend to identify the gaps between the bailout scheme and the new government's plans.

Some of the problems facing the Eurogroup are semantic. The Greeks, for example, will not countenance anything that smacks of an "extension" to the old bailout or a continued role for the "troika".

Tsipras, who rode to power on a wave of anti-austerity and anti-bailout anger, would have a hard time explaining a climbdown so soon.

But even a cosmetic change could have practical consequences. An "extension" may not prompt many euro zone national ratifications unless it involves additional financial commitments from euro zone governments.

Any new financing programme, on the other hand, might require several national parliamentary ratifications and could also bring Germany's Constitutional Court into play.

Among those requiring a parliamentary vote on a new bailout are Germany, Slovakia, Estonia and Finland, all identified by one veteran of EU meetings as part of a hard core of opponents to Greece's plan.

The Eurogroup's main debate will revolve around how to fund Greece until any new debt deal. Athens wants to reduce the primary budget surplus before debt service it is required to run, scrap privatisations, raise the minimum wage and spending on the poor, and reverse some labour reforms.

Greece said on Saturday that it was reviewing a 1.2 billion- euro deal for Germany's Fraport to run 14 regional airports, one of the biggest privatisation deals since Greece's debt crisis began in 2009. It has also pulled the plug on the privatisation of the ports of Piraeus and Thessaloniki. ($1 = 0.8785 euros)