The panel suggested post-Fukushima safety steps taken at other nuclear plants may not be enough to cope with a big, complex catastrophe caused by both human error and natural causes in a "disaster-prone nation" like Japan. 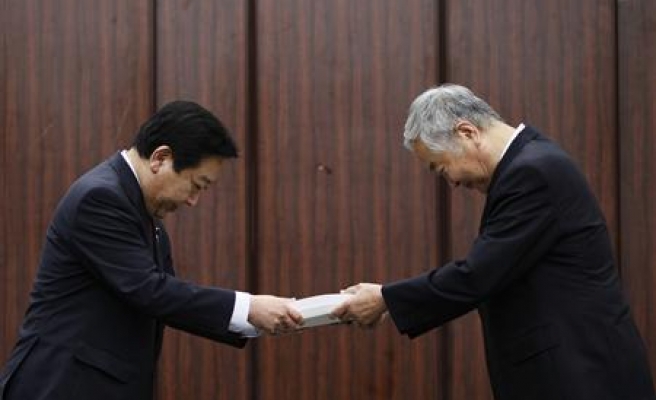 A government-appointed inquiry into Japan's Fukushima nuclear crisis raised doubts on Monday about whether other atomic plants were prepared for massive disasters despite new safety rules, and delivered a damning assessment of the regulators and the station's operator.

The report, the second this month about the disaster, could be seized upon by Japan's increasingly vociferous anti-nuclear movement after the restart of two reactors, and as the government readies a new energy policy due out next month.

The panel suggested post-Fukushima safety steps taken at other nuclear plants may not be enough to cope with a big, complex catastrophe caused by both human error and natural causes in a "disaster-prone nation" like Japan, which suffers from earthquakes, tsunami, floods and volcanoes.

"We understand that immediate safety measures are being further detailed and will materialise in the future. But we strongly urge the people concerned to make continued efforts to take really effective steps," said the panel, chaired by University of Tokyo engineering professor Yotaro Hatamura.

Tokyo Electric Power Co (Tepco), the operator of the Fukushima Daiichi plant, and regulators failed to plan for a massive natural disaster, the panel said, blaming them for being lulled by the same "safety myth" blasted by a parliament-appointed team of experts earlier this month.

"Both the government and companies should establish a new philosophy of disaster prevention that requires safety and disaster measures against any massive accident and disaster ... regardless of event probability," the report said.

But the inquiry stopped short of accusing the regulators and Tepco of "collusion", a charge included in a strongly-worded report by a parliamentary panel earlier in July.

"The Fukushima crisis occurred because people didn't take the impact of natural disasters so seriously," Hatamura told a news conference.

"Even though there were new findings (about the risk of a tsunami), Tepco couldn't see it because people are blind to what they don't want to see."

Prime Minister Yoshihiko Noda's decision to restart Kansai Electric Power Co's two reactors this month has energised the country's growing anti-nuclear movement, with more than 100,000 taking to the streets in Tokyo a week ago.

All of Japan's 50 reactors were shut down for safety checks after Fukushima. Critics say the two restarted reactors do not meet all the government's safety criteria announced this April.

The panel called on the government to immediately take additional steps, including ensuring that off-site nuclear accident management centres are protected against the kind of massive radiation leaks that made the one at Fukushima useless.

The Fukushima Daiichi plant, 240 km (150 miles) north of Tokyo, was hit on March 11 last year by an earthquake and tsunami that knocked out power supply and swamped its backup power and cooling systems, resulting in meltdowns of three of its six reactors. Some 150,000 people were forced to flee as radioactive materials spewed, some never to return.

The government-appointed panel said there was no proof the earthquake was a key factor in the disaster but added that some impact could not be ruled out, contradicting Tepco's own findings, which put the blame solely on the tsunami.

The panel called on Tepco to review data presented to the panel because it believes they contain errors, echoing other criticism of the operator, and urged the utility to carry out further investigations into the causes of the disaster.

But the panel acknowledged shortcomings in its own probe, including a failure to clarify the causes of damage to the main reactor buildings, how radioactive materials leaked and why the explosions that wrecked the three reactor buildings occurred.

Hatamura also said due to time restrictions, his panel was unable to address the concerns of residents, and the international community, who questioned whether the damaged reactors and the pool of used nuclear fuel at the No.4 reactor could withstand another earthquake.

"I now understand what people are worried the most about is the vulnerability of the No.4 spent fuel pool. I wish we had started an investigation on it much earlier," Hatamura said.