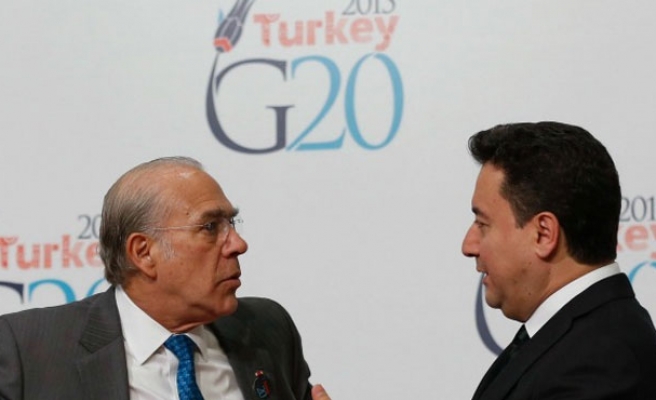 Group of 20 finance officials look likely to reject a proposal to set countries specific investment targets to spur a global economy which appears increasingly reliant on the United States for growth.

The meeting of finance ministers and central bankers in Istanbul comes as Greece casts a new shadow over Europe, cheap oil plays havoc with inflation and growth forecasts and a strengthening dollar threatens emerging economies.

Deputy Prime Minister Ali Babacan said Turkey - G20 chair for 2015 - preferred to set binding national investment targets and that the idea was under discussion. But it appeared to be struggling to win support.

"It would be quite complicated and a bit theoretical," French Finance Minister Michel Sapin told reporters.

"I am pushing for a global objective. Europe can set its own target and deliver on it, but I don't support precise objectives for everyone else."

A G20 source said the idea had already been taken off the table.

U.S. Treasury Secretary Jack Lew said last week the United States could not be "the sole engine of growth" and a senior U.S. official said Washington's message would again be that Europe is not doing enough.

Germany, with its hefty current account surplus, has come under pressure at successive G20 meetings to spend more.

Berlin has rejected that suggestion in the past and is likely to argue that its rising domestic demand and plans to increase investment, largely through the private sector, shows it is doing what it can, according to European sources familiar with the G20 agenda.

"We need to be bolder in Europe in terms of risk taking ... I hope that policy action will indeed facilitate stronger private sector investments, especially infrastructure investments," Italian Economy Minister Pier Carlo Padoan told a financial gathering in Istanbul ahead of the G20 meeting.

G20 leaders agreed measures last year to raise their collective gross domestic product growth by an additional 2 percentage points over the next five years above the level projected in 2013.

The pledge, called the Brisbane Action Plan, entails about 1,000 commitments, now likely to be slimmed down to a more manageable number for each country to deliver on.

"Keep your word, or explain," was how Babacan explained the strategy.

Coming good on those pledges could add more than $2 trillion to the global economy and create millions of new jobs over the next four years, International Monetary Fund chief Christine Lagarde said in a blog post.

The new Greek government's refusal to extend an EU/IMF bailout and instead seek a new deal that ends austerity and restructures its debt cast a long shadow at the meeting.

Canadian Finance Minister Joe Oliver said there had to be compromise.

"It's clear that Greece has got to be prepared to make some changes, and I think a wholesale repudiation of their debt is not on the cards," he told Reuters in an interview.

"But other countries, creditors will have to work with Greece to arrive at a compromise ... I don't think anybody wants Greece to leave the currency union."

The G20 put together a stimulus package that pulled the world back from the brink in 2009 but today's challenge is more delicate, with diverging monetary policies a cause of global turbulence.

The U.S. Federal Reserve looks set to raise interest rates this year, a stark contrast to huge money printing programmes by the European Central Bank and Bank of Japan and impromptu rate cuts from India to Australia, Canada to Denmark. China's giant economy is also slowing.

A by-product of that is the dollar being driven higher while other major currencies tumble.

Bank of Japan Governor Haruhiko Kuroda told reporters the slide in global oil prices was a benefit for the world economy and the recent weakness of the yen was not a problem.

Italy's Padoan said lower oil prices and the anticipated impact of an ECB plan to buy around a trillion euros of government bonds had helped improve the economic picture and would push the euro to a more "consistent" level.

The Organisation for Economic Cooperation and Development said structural reforms had slowed over the past two years.

G20 nations must focus on higher labour productivity and become more competitive and innovative if they want to boost growth, the OECD said in a report prepared for the meeting.

Bank of England Governor Mark Carney urged the G20 to mount a "big push" to implement global regulatory reforms, fearing that governments may be tiring of non-stop rule-making since the financial crisis six years ago.

Carney was speaking as head of the Financial Stability Board which, since Lehman Brothers crashed in September 2008, has coordinated a raft of new banking and markets rules to make the financial system more resilient.