G20 seeks to calm markets by prioritizing growth over austerity

Indications that the U.S. Federal Reserve would scale back its monetary stimulus dominated the debate, with emerging economies most concerned hit by a resulting selloff in stocks and bonds, and a flight to the dollar. 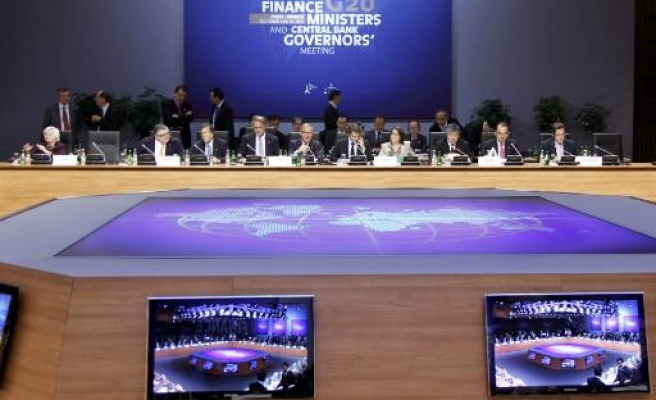 The Group of 20 nations put growth ahead of austerity, seeking to rebalance a multi-speed global economy and pledging to shift policy carefully so recovery is not derailed by volatile financial markets.

Finance ministers and central bank governors meeting in Moscow on Saturday put the finishing touches to a joint communique that delegates said was little changed after they met for dinner on Friday night.

Indications that the U.S. Federal Reserve would scale back its monetary stimulus dominated the debate, with emerging economies most concerned hit by a resulting selloff in stocks and bonds, and a flight to the dollar.

Hosts Russia said G20 policymakers had soft-pedalled on goals to cut government debt in favour of a focus on growth and how to exit central bank stimulus with a minimum of turmoil.

"(G20) colleagues have not made the decision to take responsibility to lower the deficits and debts by 2016," Finance Minister Anton Siluanov told Reuters. "Some people thought that first you need to ensure economic growth."

While the U.S. recovery is gaining traction, China's export motor is sputtering, Japan's bid to break out of deflation has not reached escape velocity, and demand in the euro zone is too weak to sustain a job-creating recovery.

"We do not see any revival of growth in Europe yet, and Japan - we're keeping our fingers crossed," said Indian Finance Minister Chidambaram Palaniappan.

"The best case scenario for today would be for the advanced economies to get growth going. They must keep in mind the impact of their actions on the large emerging economies."

A final draft, obtained by Reuters, said an action plan to boost jobs and growth, while rebalancing global demand and debt, would be readied for a G20 leaders summit hosted by President Vladimir Putin in September.

"We remain mindful of the risks and unintended negative side effects of extended periods of monetary easing," the draft said. "Future changes to monetary policy settings will continue to be carefully calibrated and clearly communicated."

In return for its pledge to 'message' its monetary policy intentions clearly, Washington managed to ensure that the text contained no binding fiscal targets, saying that consolidation should be "calibrated" to economic conditions.

Sources at the meeting said Germany was less assertive than previously in seeking binding targets to reduce borrowing to follow on from a deal struck in Toronto in 2010, with the improving U.S. economy adding weight to Washington's call to focus on growth.

With youth unemployment rates approaching 60 percent in euro zone strugglers Greece and Spain, the growth versus austerity debate has shifted - reflected in the fact that G20 finance and labour ministers held a joint session on Friday.

The crisis in the euro zone periphery has been exacerbated by capital outflows, and the communique pledged to move "decisively" towards creating a banking union in Europe that could revive cross-border lending.

Ben Bernanke's announcement two months ago that the Fed may start to wind down its $85 billion in monthly bond purchases sparked a panicky sell-off, particularly in emerging markets.

Investors were calmed by testimony to Congress this week by Bernanke, who is not in Moscow, although he said the exit plan from money-printing remained on the cards.

The spillover effects on developing countries from the withdrawal of quantitative easing policies by developed nations, and the United States in particular, dominated the weekend's discussion, Siluanov said.

"There were no arguments but there was discussion," he said.

The G20 accounts for 90 percent of the world economy and two-thirds of its population - many living in the large emerging economies at greatest risk of a reversal of capital inflows that have been one of the side effects of the Fed stimulus.

China is under pressure to encourage domestic demand-driven growth and allow greater exchange rate flexibility as part of wider efforts to rebalance the global economy which features a huge Chinese surplus and matching U.S. deficit.

Beijing offered an early olive branch, removing a floor on the rates banks can charge clients for loans, which should reduce the cost of borrowing for companies and households. Yet this was not discussed at the G20 talks.

Siluanov said he and others would monitor progress in Beijing and Japanese Finance Minister Taro Aso labelled China's move a step in the right direction.