The Group of 20 leading economies hold talks in Istanbul on Monday and Tuesday. 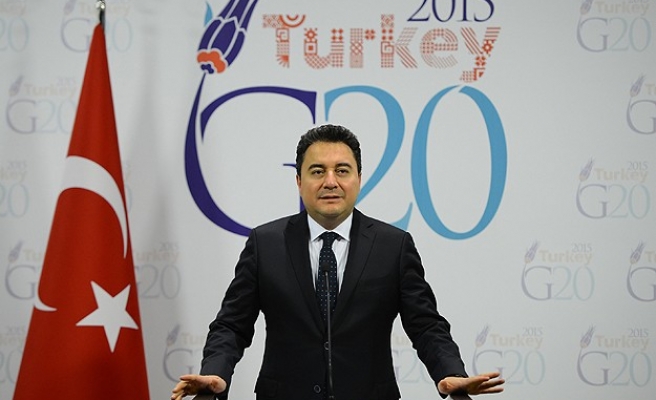 Concern over the ability of the United States to sustain the global economy as most other parts of the world slow will be high on the agenda as the Group of 20 leading economies hold talks in Istanbul on Monday and Tuesday.

With Greece's woes casting a shadow over Europe again, cheap oil playing havoc with inflation and growth forecasts, and the strengthening dollar posing a threat to emerging market economies, the meetings come at a critical time.

"There is a lot at stake," IMF Managing Director Christine Lagarde said in a blog post published on Friday.

"Without action, we could see the global economic supertanker continuing to be stuck in the shallow waters of sub-par growth and meagre job creation."

Turkey's Deputy Prime Minister Ali Babacan, who is in charge of the economy, has said tackling sluggish global growth and giving low income nations more voice will be priorities for Turkey's G20 presidency.

The former will be easier said than done.

U.S. Treasury Secretary Jack Lew said last week the United States could not be "the sole engine of growth" and a senior U.S. official said Washington's message going into the meetings would again be that Europe is not doing enough.

"Geopolitical crises -- in Ukraine, Iraq, and Syria -- pose serious risks, complicating the recovery ... And though America is carrying the world economy at the moment, that is simply not sustainable."

Germany, Europe's largest economy, is likely to argue that rising domestic demand and plans to increase public spending show it is doing what it can, according to European sources familiar with the G20 agenda.

Babacan has said that pushing G20 member nations to meet reform commitments made at previous meetings would be key, a strategy he dubbed: "Keep your word, or explain".

Coming good on commitments made at the G20 summit in Brisbane last November could add more than $2 trillion to the global economy and create millions of new jobs over the next four years, Lagarde said.

The G20 came into its own during the 2007-09 financial crisis when it put together a global stimulus package, but the challenge now is far more delicate, with diverging monetary policies one of the causes of the global turbulence.

The U.S. Federal Reserve looks set to raise interest rates this year, a stark contrast to impromptu cuts from India to Australia, Canada to Denmark, as well as China's cut in bank reserve requirements and the abrupt end to the Swiss franc cap.

A senior Canadian finance official said the G20 communique would probably emphasise the importance of central bank actions in sustaining demand growth and said the Fed and Bank of England had voiced support for other central banks doing what they needed to support growth.

Turkey's own monetary policy may also be in the spotlight. Its central bank is under government pressure to cut interest rates ahead of a June election despite stubborn inflation.

"Interest rates are what shape inflation. If you keep the rates high, the inflation will be high too but if you cut it, inflation will also fall. There are still people who don't understand this," Turkish President Tayyip Erdogan said last week, sending the lira to a record low.

A source close to French Finance Minister Michel Sapin said Greece would be discussed, but noted the situation was very different to a few years ago, with protection mechanisms in place and European markets less sensitive to its woes.

France has also asked to discuss the fight against terrorist financing, an important topic for Turkey given the fight with Islamic State militants taking place just over its southern borders in Syria and Iraq.