63 percent of Germans backed Merkel's handling of the euro crisis, up from 60 percent in May, though a majority also thought she should explain her policies better 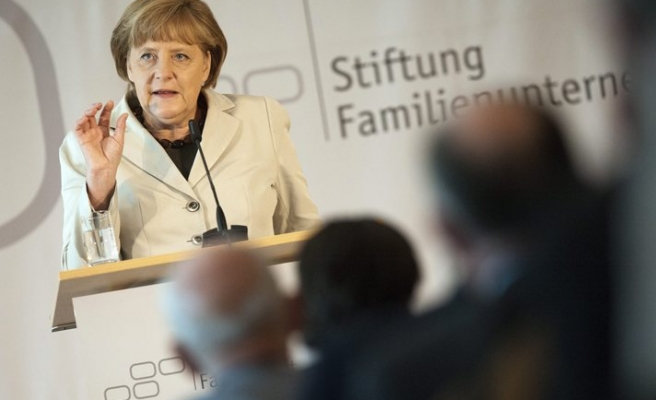 Ahead of elections in 2013, Merkel is resisting foreign pressure to cut euro zone stragglers such as Greece more slack as they try to enact German-inspired austerity measures in a recession. She says fiscal discipline is crucial for recovery.

The ZDF-Politbarometer survey also showed 63 percent of Germans backed Merkel's handling of the euro crisis, up from 60 percent in May, though a majority also thought she should explain her policies better, echoing criticism from Germany's President Joachim Gauck, a ceremonial, non-partisan figure.

Greece has asked lenders for an additional two years to implement deficit-cutting measures, citing a deeper-than-expected recession, but Germany has rejected this request.

Merkel's spokesman Steffen Seibert reiterated on Friday that Greece must stick to both "the content and the timetable" set out in its memorandum of understanding with international lenders.

In contrast, Spain won permission from euro zone finance ministers this week to take an extra year to reach its deficit reduction targets in exchange for further budget savings.

More than half of Germans taking part in Friday's poll rejected a mutualisation of euro zone debt, or euro bonds, even if Europe moves towards a common fiscal policy as Berlin wants.

Merkel says Germany could accept euro bonds only at the end of a process of fiscal and political unification in Europe. Otherwise Germany fears heavily indebted countries such as Italy and Greece would lose incentive to reform their economies.

Germans are increasingly worried about the financial costs of rescuing the euro zone. A number of ordinary citizens have joined academics and lawmakers, including from Merkel's coalition, in seeking an injunction from the Constitutional Court to block approval of the euro zone's new bailout fund.

The court is expected to take some time to decide whether to accept or reject their requests and also to rule on whether the fund, the European Stability Mechanism (ESM), complies with Germany's constitution.

The SPD's preferred coalition partner, the Greens, were on 13 percent, as were the Pirates, a new party that champions Internet freedom. The far-left Linke had 6 percent.