'The good news is that the recovery continues; we have growth; we are not in crisis,' Christine Lagarde says 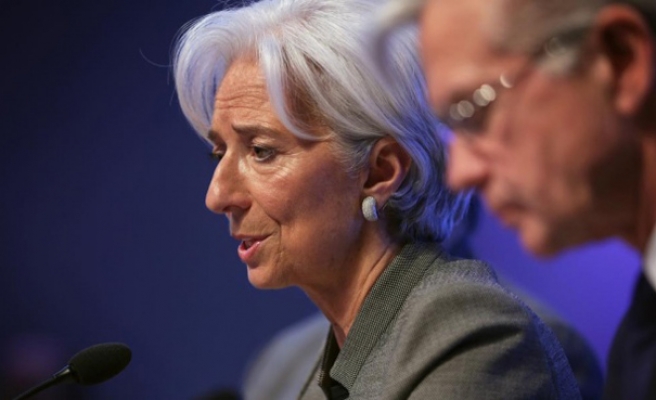 Global economic recovery is still "too slow" and "too fragile" in the face of growing risks from a slowdown in China and subdued growth in developing economies, International Monetary Fund chief Christine Lagarde said Tuesday.

"The good news is that the recovery continues; we have growth; we are not in crisis," Lagarde said in a speech in Frankfurt.

"The not-so-good news is that the recovery remains too slow, too fragile, and risks to its durability are increasing," she warned.

The IMF has already hinted it will cut its current 2016 global growth forecast of 3.4 percent next week when it publishes fresh forecasts at its traditional spring meeting with the World Bank in Washington.

"There has been a loss of growth momentum," Lagarde said.

"Overall, the global outlook has weakened further over the last six months -- exacerbated by China's relative slowdown, lower commodity prices, and the prospect of financial tightening for many countries," she continued.

"Emerging markets had largely driven the recovery and the expectation was that the advanced economies would pick up the 'growth baton.' This has not happened."

Lagarde said other risks were exacerbating the situation, such as uncertainties from terrorist attacks, "the silent threat of global epidemics; and conflict and persecution that force people to flee their homes."

In the current situation, the IMF was "on alert, not alarm," Lagarde said, urging major powers to accelerate structural reform, maintain accommodative monetary policies and invest in infrastructure.

She urged "decisive action" ahead of a meeting of leading advanced and emerging economies in Washington on April 14 and 15.

Lagarde also warned against resorting to protectionist policies, as the US presidential candidates publicly question free trade and Europe seeks to rein in free movement in response to the refugee crisis.

"To some, the answer is to look inward ... to close borders and to retreat into protectionism," she observed.

But "history has told us -- time and again -- this would be a tragic course," Lagarde warned.