Wheat prices surged to a two-year high on Friday as markets reacted to the sudden imposition of a ban on grain exports from drought-hit Russia. 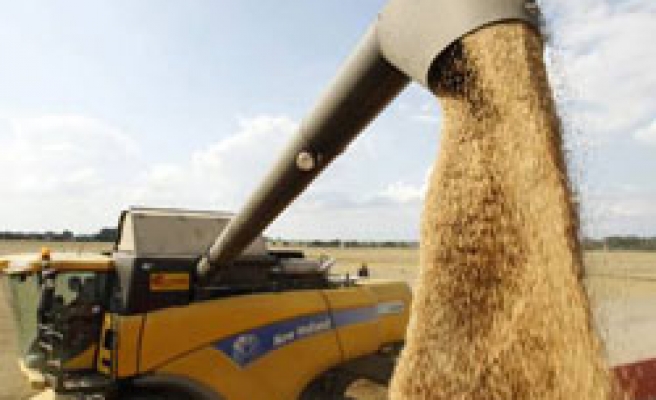 Wheat prices surged to a two-year high on Friday as markets reacted to the sudden imposition of a ban on grain exports from drought-hit Russia.

Prime Minister Vladimir Putin moved on Thursday to halt grain and flour exports to head off inflation following Russia's worst drought in 130 years, and the railroad monopoly said Friday it would stop loading grain for export from Saturday.

The introduction of the export ban from Aug. 15 to the end of the year may be revised depending on results of the harvest season, Interfax news agency quoted First Deputy Prime Minister Igor Shuvalov as saying on Friday.

Wheat futures on the Chicago Board of Trade rose to a peak of $8.41 a bushel, the highest in about two years with prices nearly doubling since early June.

The rise has revived memories of the surge in prices in early 2008, when U.S. wheat rose above $13 a bushel, which helped to fuel food inflation and led to rioting in many countries across the world.

Analysts, however, downplayed the link, adding that world stocks have grown steeply during the last couple of years which saw the two biggest wheat crops in history.

"Stocks are close to 50 percent higher today (than they were during the last price spike in early 2008). You had a completely different scenario then," said Barclays Capital analyst Sudakshina Unnikrishnan.

Persistent high prices could, however, drive fear of food inflation in key buyers such as Indonesia and the Philippines, analysts said.

"If prices remain elevated for a sustained period, then the probability of upward adjustment in retail price of wheat and its derivatives goes up," Barclays Capital said in a report.

"However, food prices tend to be politically sensitive, so we can expect some action from Asian governments."

Russia had been the world's third largest wheat exporter last year but is set to slide down the table this season with the worst drought since records began devastating crops.

"Effectively, a big chunk of the global market is off-line -- there's going to be something like 5 million tonnes that aren't going to be available for export," said Matthew Kaleel, a commodities specialist at fund manager H3 Global in Sydney.

Trading companies that have sold Russian wheat to millers in Asia are considering declaring force majeure on supply contracts that could involve up to 1 million tonnes of wheat.

Force majeure clauses in supply contracts free firms from their obligations without penalty due to events beyond their control. They are often used in response to natural disasters.

"If the contract says Russian wheat, it is straight away force majeure," said one trader with an international trading company in Singapore. "We haven't heard but it will happen, even my company will do it."

Two suppliers scrapped deals to ship 65,000 tonnes of Black Sea wheat to Bangladesh, while in the Philippines a leading importer of feed wheat from the Black Sea, buyers were waiting to hear from suppliers.

"Those with supply contracts are a bit nervous, even the buyer," said a grains trader in Manila.

"The contracts are written with optional origins but it means the sellers will also have to pay through their noses and those noses will bleed really bad."