The new package is designed to ensure Greece gets an 8 billion euro rescue loan vital to pay state salaries and bills in October. 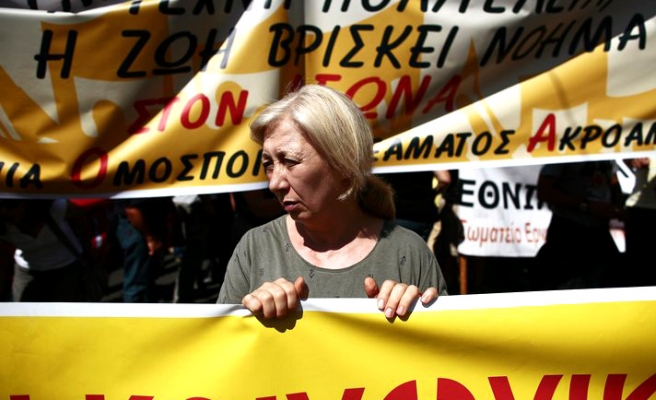 Greece adopted yet more austerity measures on Wednesday to secure a bailout installment crucial to avoid running out of money next month, as the IMF warned that Europe's sovereign debt crisis risks tearing a giant hole in banks' capital.

The Greek cabinet agreed to cut high pensions by 20 percent, put 30,000 civil servants in a "labor reserve" on a road to redundancy, lower the income threshold for paying tax and extend a real estate tax, a government spokesman said.

"The measures taken today allow us to comply with the bailout plan through 2014," the spokesman, Ilias Mossialos, said.

The new package is designed to ensure Greece gets an 8 billion euro rescue loan vital to pay state salaries and bills in October. Senior European Union and International Monetary Fund officials are to arrive in Athens early next week to review progress, Mossialos said. [ID:nA8E7JO01A]

Greece is on the front line of the euro zone debt crisis that has engulfed Ireland and Portugal and now threatens Italy, Spain and some of Europe's biggest banks, risking plunging the West back into recession.

Canada's finance minister, Jim Flaherty, added his voice, calling on Europe to make absolutely clear its firm commitment to Greece and monetary union and to provide resources -- as much as 1 trillion euros -- to backstop banks and nations .

"Otherwise the markets will get ahead, we will have some sort of a crisis," Flaherty told the Canadian Broadcasting Corp. "It will become a banking crisis, it will affect banks all around the world, we could be into another credit crisis which will cause contraction in the real economy." [ID:nS1E78K25Q].

But any agreement around a coordinated European plan could be weeks away. French President Nicolas Sarkozy pointed to the next G20 leaders meeting in France on Nov. 3 and 4.

"We have a lot of work to do, preparing the G20 in Cannes and on this subject our priority is how to help the world find the path to growth," Sarkozy said after he met with U.S. President Barack Obama on the sidelines of the United Nations gathering in New York to discuss the fragile world economy.

But a French presidential source said Sarkozy assured Obama the euro zone would resolve the crisis. European Council President Herman Van Rompuy also provided assurance that default by Greece was not an option "at all" and the contagion risk from any such default would be too great.

Meanwhile, the U.S. Federal Reserve on Wednesday announced a program to stimulate growth with a plan to lower longer term interest rates through $400 billion in Treasury bond purchases. It cited growing risks to the economy, including strains in global financial markets among the reasons for its action. [ID:nS1E78K1V1]

In Greece, the move for greater austerity sparked a call for new protests. Greece's two biggest labor unions said they would stage 24-hour strikes on Oct. 5 and Oct. 19 to protest the new measures required by international lenders.

"We will fight to the end, to topple this policy," Ilias Iliopoulos, general secretary of public sector union ADEDY, told Reuters on Wednesday.

Finance Minister Evangelos Venizelos acknowledged that Greece's public finances would have gone off the rails without checks by the so-called troika of EU/IMF inspectors, who walked out of Athens on Sept. 3 after uncovering a new deficit hole.

Diplomats and market analysts say Greece seems sure to get the aid tranche, if only to buy time for European governments to recapitalize banks and strengthen the euro zone's rescue fund to cope with a probable default, perhaps early next year.

A German government spokesman said Greek Prime Minister George Papandreou would discuss the situation with Chancellor Angela Merkel on a visit to Berlin next Tuesday.

In another move to help banks avoid a potential credit crunch, the European Central Bank loosened its collateral rules on Wednesday to widen the pool of assets that banks can post to obtain central bank funds.

IMF chief economist Olivier Blanchard said European countries were warming to the idea that banks in the region need to boost their capital to withstand potential losses from the sovereign debt crisis. The tone has changed since a weekend meeting of EU finance minister and central bankers in Poland.

"The position of most European countries is, yes, we have a problem, capital needs to be put into the banks," he told news channel France24. "It seems to me there's been a 180-degree change in a lot of countries."

If banks are unable to raise more capital on financial markets then authorities might need to step in, although outright nationalizations are not necessary, he said.

Barclays Capital said European banks may need some 230 billion euros to preserve a 6 percent core Tier 1 ratio in the extreme case of 50 percent haircuts on all sovereign debt of Greece, Ireland, Portugal, Italy and Spain, and the likely deep recession that would follow. The figure would be far smaller if only Greece were provisioned.

European banking shares have suffered steep falls in recent weeks on concerns about the sector's exposure to debt issued by Greece, with French banks suffering some of the biggest losses, as much as 40 percent.

The chief executive of BNP Paribas, France's biggest bank, said in a newspaper interview that his company could withstand any outcome concerning Greece and that fears of an Italian default were unfounded.

Commerzbank CEO Martin Blessing told Frankfurt business journalists that euro zone leaders had bought time by setting up the EFSF rescue fund but had failed so far to find a path out of the crisis.

"I believe we have reached a crossroads," Blessing said. If Europe wanted to save the single currency, it must move toward a fiscal union. "A monetary union without a fiscal union, this construct has failed," he said.