Buses and metro workers will strike and tax collectors themselves will begin a 48-hour stoppage in protest against the bill and other new austerity measures. 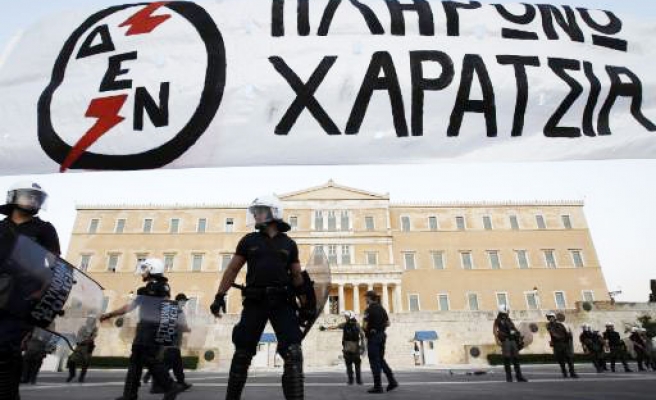 Lawmakers are expected to approve an unpopular property tax on Tuesday to open the way for the return of inspectors from Greece's bailout lenders and the release of vital aid, despite growing anger among austerity-hit Greeks.

Buses and metro workers will strike and tax collectors themselves will begin a 48-hour stoppage in protest against the bill and other new austerity measures.

The vote is the first test of the government's capacity to win backing for a new wave of belt-tightening measures announced last week to convince the International Monetary Fund and European Union that Greece is worthy of an 8-billion euro ($11 billion) loan that Athens needs to avoid bankruptcy next month.

Having grown increasingly impatient at the slow pace of reforms, an EU/IMF team abruptly quit Greece in early September following disagreements over what was needed for Athens to plug fiscal slippage this year and next.

Finance Minister Evangelos Venizelos met representatives from the lenders in Washington over the weekend and Greek officials said the inspectors had asked Athens for written assurances it will implement the measures announced before they return -- an event expected later this week.

"We are at the moment of truth for Greece," European Commission spokesman for economic affairs Amadeu Altafaj said on Monday. "This is the last chance to avoid the collapse of the Greek economy. The criteria must be fully met in order to allocate the funds."

The IMF and EU team has rapped Athens for dragging its feet on cutting the size of the bloated public sector because it has made little progress on a pledge to cut the 730,000 public workforce by a fifth, eliminate dozens of inefficient state entities and sell off loss-making state firms.

The government has failed to end rampant tax evasion, while the third year of economic contraction has undermined budget revenues and put Greece off-track for its goal of cutting the budget deficit to 7.6 percent of annual output this year.

Analysts say the property tax is a short-term measure that will not forestall a default most economists see as inevitable.

Activists have pledged to step up demonstrations in Athens' central Syntagma square, where Greek riot police clashed with anti-austerity protesters on Sunday, firing tear gas in the first such unrest after a summer lull.

When lawmakers voted on an earlier austerity package at the end of June, more than 100 people were injured in two days of clashes with police at the square in front of parliament.

Prime Minister George Papandreou will be in Germany for a meeting with Chancellor Angela Merkel during the vote on the tax bill, which is scheduled for around 1600 GMT.

He will discuss reforms ahead of another key parliamentary vote in Germany on Thursday meant to give more powers to the EU's EFSF bailout fund.

Although unhappy with imposing yet more pain on voters hit by tax hikes and spending cuts over the past 18 months, ruling Socialist party lawmakers are expected to toe the line to prevent a Greek default that would shake global markets and possibly engulf other debt-laden euro zone states.

"I believe that the government is not going to face serious problems in parliament. (Ruling party) PASOK lawmakers are going to vote," said Costas Panagopoulos, at ALCO pollsters. "They are unhappy, but it is very difficult for anyone to say no because it would probably cause the government to break down."

The government's majority has fallen to 154 out of parliament's 300 seats after one deputy was expelled from the party for voting against a previous austerity package in June.

This time, no PASOK lawmaker has threatened to vote against the tax, and analysts also expect them to vote for other austerity steps as they emerge in coming weeks.

"It is different now, because they have realised that things are even worse," Panagopoulos said. The fact many ruling party lawmakers did not expect to be re-elected if snap elections were held now also helped close party ranks, he said.

Some 92 percent of Greeks believe the austerity measures are unfair and 72 percent believe they will not work, according to a GPO poll published by Mega TV on Monday. But only 23 percent said they would not pay the new taxes.

The poll also showed 77.8 percent of Greeks think the country should stay in the single currency zone while 54.8 percent saw a risk that Greece would default on its 340 billion euro debt pile in the next couple of months.

Greece has vowed to do what it takes to get the next tranche and announced on Monday it may close concession deals as part of its 50-billion euro privatisation plan, another key condition for bailout aid.

The property tax is meant to help plug a gap of about 2 billion euros in this year's budget to try and meet EU/IMF fiscal targets.