German Chancellor Angela Merkel suggested that parts of a planned new 109-billion-euro rescue for the debt-laden country could be reopened, depending on the outcome of the troika's audit. 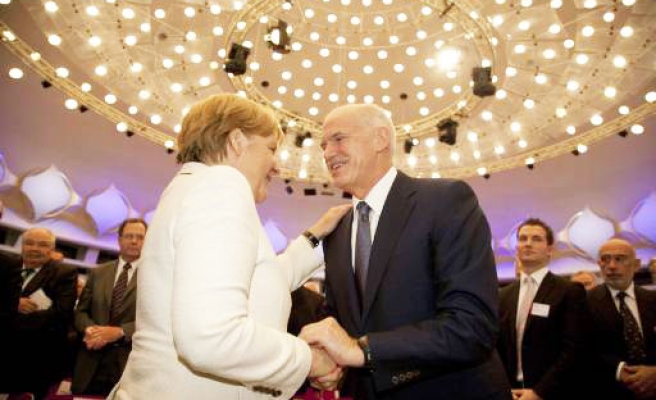 Greece's lenders are sending a team to Athens to inspect a government austerity plan they want implemented in exchange for aid, while Germany suggested a new bailout may have to be renegotiated.

Facing a wave of strikes and protests, Greece's Socialist government is accelerating its debt strategy to meet the terms of an International Monetary Fund and European Union rescue deal so it can receive a new loan next month and avoid bankruptcy.

The "troika" team of inspectors, which had threatened to cut off aid if Athens did not move faster, will begin talks on Thursday on a plan demanded by lenders to deepen budget cuts and raise taxes, which has set off protests not seen since June when riot police fought running battles with activists.

"I can confirm the Eurogroup (of euro zone ministers) will hold an additional meeting as soon as possible, still in October, to discuss the situation of Greece and consider the disbursement of the next tranche," a European Commission spokesman said in Brussels, announcing the troika's return.

German Chancellor Angela Merkel suggested that parts of a planned new 109-billion-euro ($148.6 billion) rescue for the debt-laden country could be reopened, depending on the outcome of the troika's audit.

"We have to wait and see what the troika ... finds and what it will tell us (whether) we will have to renegotiate or not," she told Greek state television NET, without elaborating.

Several hundred activists affiliated with the Greek Communists converged on the finance ministry on Wednesday waving a banner saying "We won't pay!". They planned to burn bills for a new one-off income tax introduced this summer, while Athens and other parts of the country were hit by transport strikes.

If deemed adequate by the inspectors, the new austerity drive will secure an 8-billion-euro loan Greece needs to pay bills and salaries in October and bring it closer to starting a second bailout agreed in July.

As a condition of the visit and to resolve the row with the lenders, the Greek government had promised to send a written assurance outlining its new plan to meet its bailout targets. Its contents have not been made public.

Germany has repeatedly said negotiations about the details of the second rescue deal can begin only when the troika says Greece has qualified to receive the tranche expected in October, the sixth under a first bailout agreed in 2010.

At the same time, leaders from around the world have urged euro zone capitals to end a tortuous debate and create a safety net big enough to prevent Greece's problems from spreading to other euro members and triggering a fresh global downturn.

After intensifying debate among economists and policymakers that only a 50 percent loss would make the country's debt viable, more investors have signed up to the bond exchange plan, Greek financial daily Naftemporiki reported.

Citing an unidentified finance ministry official, it said Greece's weeks-long struggle to lure private bondholders into the rescue plan had ended with it reaching the 90 percent participation target.

The finance ministry declined to comment on the report.

There is no agreement yet among euro zone governments on whether a renegotiation is needed, including more pain for Greece's bank creditors, or on a U.S.-sponsored plan to leverage the bloc's rescue fund to give it more firepower.

Germany's Bundestag (lower house) will vote on Thursday on widening the scope of the European Financial Stability Facility bailout fund, as agreed by the EU leaders on July 21.

Merkel faces a revolt within her conservative camp and may have to rely on support from the opposition Social Democrats and Greens to get the measure approved, damaging her authority.

Other trades ranging from craftsmen, printers and tax officials also staged stoppages and activists planned marches on parliament and the port of Piraeus later in the day.

"I've been trying to find a job for a year now and it's impossible," said Maria Kappa, a graduate of the School of Philosophy in Athens. "I don't see the rich people hurt by this austerity, it's always the poor who have to pay."

Lawmakers opened the way to the troika visit on Tuesday by passing a property tax bill. That piles the pressure on Greeks suffering from several waves of belt-tightening and deepens an economic downturn heading into its fourth year.

In the accelerated strategy, the government will cut the 730,000 public workforce by a fifth, reduce the public wage bill by 20 percent, as well as lower overall pensions by 4 percent in addition to a 10 percent cut already agreed in previous plans.

It will also now extend the new real estate tax until 2014, two years longer than originally planned, after the troika judged Greece's estimate that it would raise 2 billion euros a year to be too high.