Greece to stay in recession for 4th yr in 2012: finmin

Venizelos pointed to widespread tax evasion to defended the government's move to slap other taxes on paychecks under a medium-term fiscal plan that was voted in July. 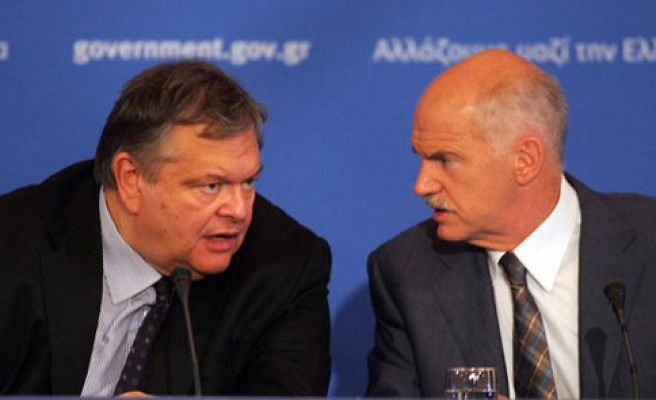 Greece will be stuck in recession for a fourth consecutive year in 2012, it's finance minister said on Thursday, revising previous government estimates that the downturn would bottom out this year.

The decline in economic activity, made worse by austerity measures aimed at repairing public finances and stopping deficits, has topped projections. It has also hindered the attainment of fiscal targets set by Greece's international creditors.

"We must realise ... that there is a cumulative recession over three years which will now become four years," Finance Minister Evangelos Venizelos told parliament.

"We must all realise how deep the recession is to understand the divergence from the troika's (EU/IMF/ECB inspectors) projections in May 2011".

Athens slapped a new property tax to make up for falling behind its revenue and spending targets and meet this year's 7.6 percent of GDP deficit goal, crucial for its continued funding under an EU/IMF bailout agreed last May.

Inspectors from the European Union, the International Monetary Fund and the European Central Bank are set to resume their fifth performance review next Monday before the next 8 billion euro loan instalment is released, without which Greece would default after October.

Based on the latest seasonally unadjusted data by the country's statistics service, the economy slumped 7.3 percent year-on-year in the second quarter after an 8.1 percent decline in the first three months of the year.

Venizelos pointed to widespread tax evasion to defended the government's move to slap other taxes on paychecks under a medium-term fiscal plan that was voted in July.

"This is fictitious, it is not the real picture. At least with property everybody pays based on location and value," he said.

Commenting on the recently announced property levy, Venizelos said the government opted for a measure that would have the smallest recessionary impact.

Based on 2009 data and prices, private investment in homes was estimated at 400 billion euros, or 520 billion if commercial shops are added, Venizelos said. He the Greek central bank estimated private real estate holdings at about 1.0 trillion euros.

"This (property) levy amounts to 0.2 percent of the estimate by the Bank of Greece on property. It is a minimal, minor insurance premium for property in view of the economic crisis," Venizelos said.