"Greece does not need new loans and could not sign a new bailout for money it does not need," Samaras told the paper in an interview. 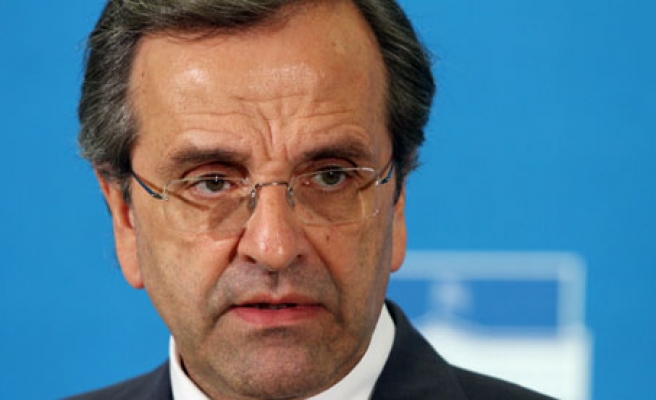 Greece is beating its fiscal targets and will not need a third bailout from its international creditors, Prime Minister Antonis Samaras told Sunday's Realnews newspaper, confident that the country's debt will soon be deemed viable.

After nearly crashing out of the euro zone two years ago, Greece has managed to bring its finances back on track and post a budget surplus before interest payments last year.

Athens has relied on a 240 billion euro EU/IMF financing package since the second half of 2010 to stay afloat. Bailout funding from its euro zone partners ends in December while IMF aid will run out in the first quarter of 2016.

"Greece does not need new loans and could not sign a new bailout for money it does not need," Samaras told the paper in an interview.

"We are exiting the bailout for good, and our goal is to never again need to go into such a (bailout) programme, asking for loans to make it through the year."

Samaras said that upon completion of the bailout, the EU/IMF/ECB troika supervising the country's adjustment programme would be leaving, as has been the case with Ireland and Portugal.

He said fiscal progress and reforms to make the economy more competitive had helped Greece gain back credibility and that its debt, projected to top 177 percent of output this year, would soon be deemed viable.

"I am optimistic, so far we have attained our targets and will meet this last one as well. Greece will get a 'certification' on the viability of its debt," he said.

Samaras sniped at the anti-bailout leftist opposition Syriza party, which is leading the conservatives in his ruling coalition in recent polls, saying its populist promises would leave Greece needing a new bailout.

Syriza, highly critical of the austerity recipe Greece has applied to rectify its finances and ensure the continued flow of aid from its creditors, has pledged to undo the painful cuts in wages and pensions and end the bailout's fiscal corset.

"Can Greece's competitiveness bear a higher minimum wage, or will this lead to higher unemployment? When we had a 751 euro base (monthly) wage Greece had chronic disinvestment and did not even produce pins," Samaras told the paper.