Greece's Tsipras has to watch left flank as well as EU

Syriza's left wing could rebel against compromise with euro zone. 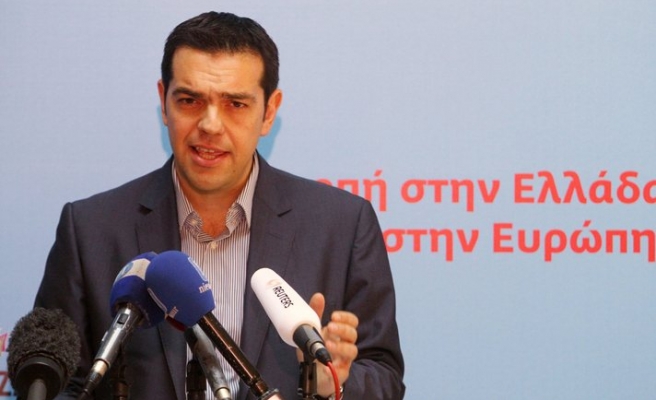 Greek Prime Minister Alexis Tsipras is not just confronting strong opposition to his plans to end austerity among Greece's euro zone partners. He also has to keep one eye on his own fractious hard-left political party back home.

The Syriza movement, elected on a popular anti-austerity platform on Jan. 25, is just what it says on the tin when translated - a coalition of the radical left.

It comprises 50 shades of left-wing iconoclasts, from social democrats to greens, libertarian Marxists and former communists. Syriza is one party now but it was created as an electoral umbrella for disparate anti-austerity leftists.

Some members, including ministers, might well revolt if any deal with the euro zone fell short of Syriza's goal of ditching an EU/IMF bailout, consigning the "troika" of inspectors from international lenders to history, and reversing austerity.

A foretaste came at the weekend when Tsipras appeared set to announce his candidate for the new Greek president - state tv cameras had been summoned to his office - only to have to delay because of what local media said was government in-fighting over the political colour of the nominee.

As well as his own unruly comrades, Tsipras has to balance being in coalition with the Independent Greeks, a small right-wing nationalist party that is viscerally opposed to the bailout and believes the European Union and International Monetary Fund have being using Greece as a guinea pig to test austerity.

The 40-year-old novice prime minister is probably strong enough to weather a revolt over any euro zone agreement he may reach, Couloumbis said. But he is unlikely to want to risk one so soon into his term.

Some of what Tsipras is facing at home was on display in an Athens News Agency interview on Sunday with Energy Minister Panagiotis Lafazanis, one of Syriza's far-left firebrands.

"If our so-called partners insist on the extension, in one form or another, of the existing bailout, in other words the sinful bailout, then there will not be a deal," he said.

This was strong, uncompromising talk given that Tsipras and his finance minister, Yanis Varoufakis, have been struggling to find a formula with the euro zone to keep Greece afloat - essentially an extension that is not called an extension.

Labour market deregulation, changes to the pension system and privatisation - all areas where Tsipras may need some leeway in his negotiations - are anathema to Syriza's left-wing.

His Independent Greeks partners, meanwhile have been flirting through their leader, Defence Minister Panos Kammenos, with the idea of getting Russian, Chinese or even U.S. money to substitute for the euro zone.

Nearly a third of Syriza's 149 members of parliament may be among the most intractable on any compromise with the euro zone, enough on paper to bring the government down in a showdown.

Syriza supporters have mobilised tens of thousands of street demonstrators over the past week to urge Tsipras to stand firm against austerity. The former conservative-led government accused Syriza of fomenting violence against police at past anti-austerity rallies - a charge the leftist party denied.

But Tsipras has a number of buffers.

There are potential alternative allies if Syriza's left wing were to rebel. A new pro-European, middle-of-the-road party, To Potami, has 17 lawmakers while PASOK, the severely damaged former mainstream centre-left party, has 13.

To Potami said during the campaign it might sometimes abstain or vote with the government to support stability.

Another factor is that many Syriza and Independent Greeks politicians are just beginning to enjoy being in charge. They may not want to risk losing a seat or a ministry.

"There is nothing more stabilising than being in power," Couloubis said.