Officials played down the reports and Venizelos described them in a statement as an unhelpful distraction from the central task of sticking to Greece's EU/IMF bailout program. 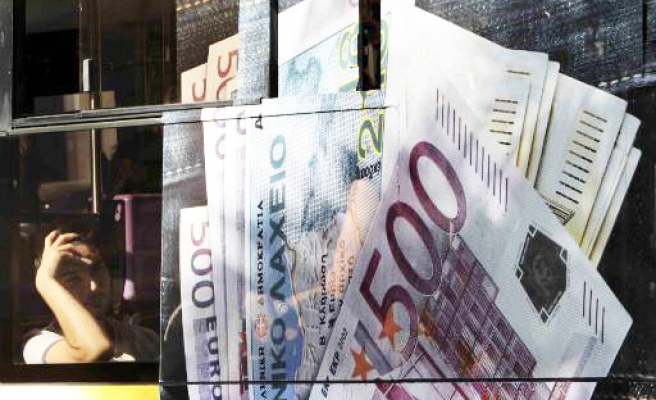 Talk of a possible Greek default gained pace on Friday while a pledge by the world's major economies to prevent Europe's debt crisis from undermining banks and the global economy failed to lift financial markets for long.

Greek Finance Minister Evangelos Venizelos was quoted by two newspapers as saying an orderly default with a 50 percent haircut for bondholders was one of three possible scenarios for resolving the heavily indebted euro zone nation's fiscal woes.

Officials played down the reports and Venizelos described them in a statement as an unhelpful distraction from the central task of sticking to Greece's EU/IMF bailout program.

European Central Bank governing council member Klaas Knot told a Dutch daily a Greek default could no longer be ruled out, the first ECB policymaker to speak openly of the prospect.

"It is one of the scenarios," Dutch daily Het Financieele Dagblad quoted him as saying.

"All efforts are aimed at preventing this, but I am now less certain in excluding a bankruptcy than I was a few months ago," Knot said, adding that he wondered "whether the Greeks realize how serious the situation is."

More signs emerged on Friday that European governments are working on recapitalizing vulnerable banks, with France's top market regulator saying 15 to 20 banks needed extra capital, although no French ones "at this stage.

The International Monetary Fund reckons Europe's banks could need to recapitalize to the tune of 200 billion euros and many bank analysts are far gloomier than the Fund.

The European Commission said European banks had already received 420 billion euros in funds since 2008 and were in much better shape than three years ago.

European shares fell again, leaving them on course for a fifth straight month of losses, after a commitment from G20 finance ministers and central bankers to "take all necessary actions to preserve the stability of the banking system and financial markets as required" failed to placate investors.

A statement issued after G20 talks in Washington said the 17-nation euro zone would implement "actions to increase the flexibility of the EFSF and to maximize its impact" by mid-October.

But it left unclear whether they would go beyond an already agreed widening of the euro zone bailout fund's powers, which has so far failed to reassure.

Newspaper Ta Nea said Venizelos had told Socialist lawmakers behind closed doors that the government's central scenario was to stick to austerity plans to receive a second 109 billion ($146 billion) bailout and avoid bankruptcy.

The alternatives were either an agreed restructuring of Greek debt with a 50 percent reduction in the face value of government bonds, or a disorderly default, he said.

Greek bank shares fell by nine percent on the reports, prompting Venizelos to say in a statement: "All other discussions, rumors, comments, scenarios which are diverting our attention from this central target and Greece's political obligation ... do not help our common European task."

Deutsche Bank said European banks may face a bigger-than-expected hit from an internationally agreed swap arrangement on Greek government debt, which has still to be sealed.

Private sector creditors agreed in July to take a 21 percent loss on Greek bonds maturing before 2020, but the loss is more likely to be 25 percent or more, said Charlotte Jones, in charge of group controlling at Germany's biggest lender.

The European Union's top economic official, Olli Rehn, said in a speech in Washington that the EU was doing everything to avoid an uncontrolled default. He did not explicitly rule out an orderly restructuring of Greek debt, which many economists see as inevitable.

Venizelos was flying to Washington for weekend meetings of the International Monetary Fund and World Bank and is expected to discuss Greece's position with fellow finance ministers on the sidelines.

The government approved a raft of more draconian austerity measures this week, including putting 30,000 public employees on a path to redundancy, cutting pensions and raising taxes, in an effort to secure the next 8 billion euro loan installment vital to avoid running out of money in mid-October.

Shares of several European banks have plunged and funding costs have risen as investors worried about exposure to debt issued by Greece and other debt-heavy European countries.

G20 participants did not say how the 440 billion euro EFSF might be altered although French Finance Minister Francois Baroin used the word "leverage" in comments to reporters.

The United States has previously proposed that Europe could leverage up the European Financial Stability Facility, giving it more firepower to protect the euro zone and its banks. German politicians and central bankers say that would be illegal.

A U.S. official, speaking after the G20 meeting, said the group showed a heightened sense of urgency but did not discuss a specific mechanism to leverage or expand the bailout fund.

Politicians in northern Europe, especially in Germany, have opposed dedicating more money to offset what they see as the profligacy of countries such as Greece. Those tensions have also flared within the European Central Bank over its role in buying bonds of struggling euro zone states.

However, Europe has come under heavy pressure from the United States and other countries to take bolder steps.

Earlier on Thursday, U.S. Treasury Secretary Timothy Geithner voiced optimism that Europe would devote more of its own resources to backstop euro area governments and banks.

"I am very confident they're going to move in the direction of expanding (their) effective financial capacity," he said. "They're just trying to figure out how to get there in a way that is politically attractive."

The leaders of seven big economies stressed the need to contain the debt crisis, and finance officials from the so-called BRICS countries, including heavyweights China, Brazil and India, said they would consider giving more funds to the IMF to boost global stability.

But India said developing countries were not in a good position to bail out richer economies and the U.S. official said the G20 had not talked about emerging economies providing the IMF with more funds.