Samaras's comments come two days before a team of Greece's international lenders arrive in Athens to push for further austerity measures if the debt-laden country wants to qualify for further rescue payments and avoid a chaotic default. 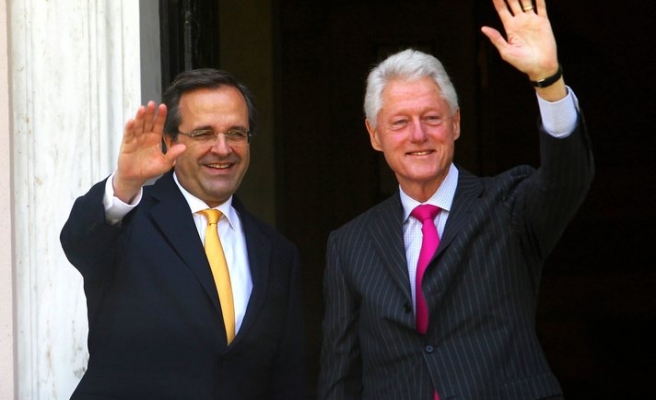 Greece is in a "Great Depression" similar to the American one in the 1930s, the country's Prime Minister Antonis Samaras told former U.S. President Bill Clinton on Sunday.

Samaras's comments come two days before a team of Greece's international lenders arrive in Athens to push for further austerity measures if the debt-laden country wants to qualify for further rescue payments and avoid a chaotic default.

Athens wants to soften the terms of a 130-billion euro bailout agreed last March with the European Union and the International Monetary Fund, to soften their impact on an economy going through its worst post-war recession.

By the end of this year Greek GDP is expected to have shrunk by about a fifth in five consecutive years of recession since 2008, hammered by tax hikes, spending cuts and wage reductions required by two EU/IMF bailouts. Unemployment climbed to a record 22.6 percent in the first quarter.

"You had the Great Depression in the United States," Samaras told Clinton, who was visiting Greece as part of a delegation of Greek-American businessmen. "This is exactly what we're going through in Greece - it's our version of the Great Depression."

Athens must reduce its budget deficit below 3 percent of GDP by the end of 2014, from 9.3 percent of GDP in 2011 - requiring almost another 12 billion euros in cuts and higher taxes on top of the 17 billion successive governments have cut from the budget shortfall.

Greece wants its lenders to give it two more years to achieve the budget goal to avoid an even deeper economic slump but its lenders have opposed the idea because it would imply an even bigger financial aid to the country.

Highlighting growing frustration with Athens, German magazine "Der Spiegel" reported on Sunday, without citing sources, that the IMF may not take part in any additional financing for Greece.

The German and Greek finance ministries declined to comment on the report, which suggested additional support required for Athens could range from 10-50 billion euros.

Officials have already indicated there would be a shortfall on the current bailout. How much is likely to depend on the extent by much Greece misses its fiscal targets and the extent of support needed to keep its major banks afloat.

The inspection team of the international "troika" of the EU, the IMF and the ECB will focus on the 11.7 billion euros of spending cuts Athens needs to take in 2013 and 2014.

Clinton criticized Greece's lenders for focusing excessively on austerity, saying Athens will be more likely to repay its debt if its manages economic recovery first.

"(It) is self-defeating... if every day people are saying this may or may not work to give us back a 100 cents on the dollar, so give us more austerity today," he told Samaras.