European paymaster Germany, whose patience over Greece has worn thin, has already said it will not soften its demands from the twice-bailed out country. 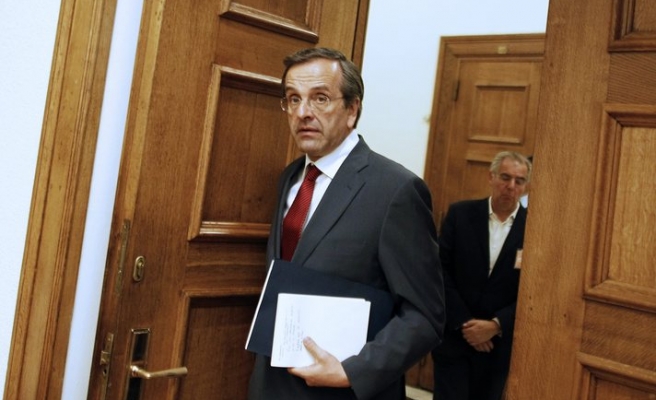 Greek Prime Minister Antonis Samaras started a European charm offensive on Wednesday with an appeal to Germans for more time to meet Athens' borrowing obligations, but he may struggle to make his case in a series of meetings this week with EU leaders.

"All we want is a bit of 'air to breathe' to get the economy running and to increase state income. More time does not automatically mean more money," Samaras said in an interview with Germany's mass-market Bild newspaper, which has often taken a ferociously sceptical line on bailing out Greece.

"Let me be very explicit: we demand no additional money. We stand by our commitments and by fulfilling all our requirements. We have to crank up growth because that decreases the financial gaps," Samaras added in the interview, which ran hours before he begins talks in Athens with euro zone chief Jean-Claude Juncker.

Appointed in June after two tumultuous parliamentary elections, Samaras hopes to persuade Luxembourg premier Juncker, who chairs the Eurogroup of 17 governments which use the common currency, that the debt-laden Greek nation has the will to ram through unpopular reforms and deserves more time to do it.

With cash coffers running empty and renewed talk of a Greek euro zone exit without more aid, Samaras is under pressure to convince European leaders that Greece has finally mustered the political courage to fulfil promises under its latest bailout.

Juncker, the most influential European policymaker to visit Athens since the conservative-led government took power on June 20, is expected to tell Samaras bluntly that Greece must carry out promised cuts and that little room for leeway exists.

In response to Samaras's comments to Bild, the Dutch finance minister gave a rapid taste of attitudes in the euro zone's less indebted northern states, questioning the idea of extending the time granted to Athens to meet its commitments: "If it concerns delaying reforms and budget cuts, then it is not a good idea," Jan Kees de Jager told reporters.

Such messages are likely to be hammered home again to the Greek leader when he travels to Berlin on Friday to meet German Chancellor Angela Merkel and to Paris a day later for talks with French President Francois Hollande.

Shortly after being elected, Samaras's government promised he would tour Europe to seek two more years to hit targets under Greece's 130-billion euro bailout from the European Union and International Monetary Fund.

But faced with a lack of European appetite for cutting Greece more slack, the government has since toned down its rhetoric on the issue and now expects merely to broach the idea during talks this week rather than formally requesting it.

"We must first re-establish our relationship with European partners that has been seriously damaged," said a Greek government official, who spoke on condition he not be identified. "This is most crucial. Talking about certain parameters then comes at a second stage."

European paymaster Germany, whose patience over Greece has worn thin, has already said it will not soften its demands from the twice-bailed out country.

Key to restoring credibility will be Greece's attempt to push through 11.5 billion euros of cuts over the next two years as demanded under the bailout - which Samaras's administration has yet to fully piece together after weeks of wrangling.

Samaras and his moderate leftist and Socialist allies have broadly agreed on the measures, but the government is still struggling to nail down the final cuts amid howls of protest over plans to slash pensions and put civil servants in a so-called labour reserve before laying them off.

"We are trying to find the best possible mix and a fair distribution of pensions. We also have to protect those getting very low pensions," a finance ministry official said. "A second issue we continue to work on is the labour reserve."

Because salary and pension cuts will lead to lower tax revenues, the government will have to find 13.5 billion euros in nominal savings to achieve its 11.5 billion target, the official said. Cuts worth 10.8 billion have been identified so far.

The measures will be presented for approval to the "troika" of officials from the European Commission, European Central Bank and IMF due back in Athens early next month for a final verdict on whether to keep money flowing to Greece.

SYRIZA, which campaigned on a pledge to abandon the bailout keeping Greece afloat, said Juncker had turned down a request to meet their young leader, a snub that one lawmaker called "a massive institutional discourtesy and an insult".

"Why this exception? I have the feeling that the leaders of the European Union and the euro zone prefer to talk with those who agree with them, or those they consider convenient," SYRIZA lawmaker Dimitris Papadimoulis told Skai television.

"Mr. Juncker needs to give an explanation, because from what I see, tomorrow he is free all morning."

Juncker's schedule includes a visit to the Acropolis Museum later on Wednesday, where Samaras hosts a dinner in his honour.

With power firmly in the hands of Samaras's pro-bailout coalition and SYRIZA relegated to the opposition, a Reuters poll last week showed a rising number of economists now believe Greece will remain stay the euro zone.

But the country is hugely off track from targets under its bailout and EU officials expect a further debt restructuring will be likely - with the cost falling on the ECB and euro zone governments.

Greece blames the slippage on a deeper than expected recession that is now in its fifth year and which Athens has likened to America's Great Depression. Nearly one out of four Greeks are jobless, and thousands of businesses have shuttered since the sovereign debt crisis exploded in 2009.