Greece's bailouts have come at the price of wage cuts and tax rises that have driven up unemployment to more than double the euro zone average and worsened a six-year recession. 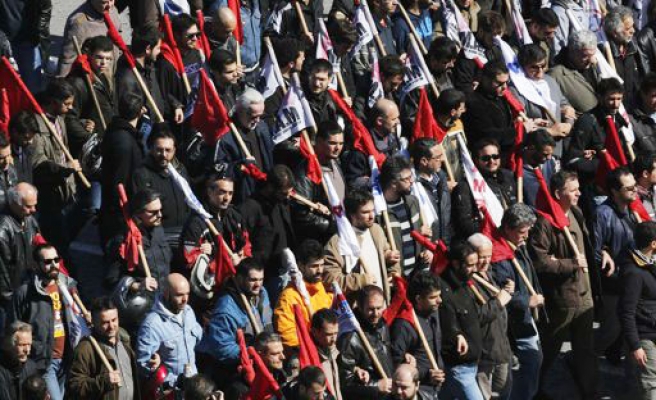 Greek public sector workers launched their first nationwide walkout after the summer lull on Tuesday to protest against planned job cuts prescribed by the country's European Union and IMF lenders.

Holding banners that read "No to firings!" and "EU, IMF out!" dozens of protesters gathered outside a court that was due to deliver its verdict on whether hundreds of laid-off public sector cleaning ladies should be rehired.

The decision on the workers, who have been protesting outside the Finance Ministry for months, was postponed to February next year.

"We will continue our struggle and escalate our action," ADEDY said in a statement, demanding that all public sector workers who have been fired get their jobs back.

Athens, which has been bailed out by the EU and IMF with more than 240 billion euros in aid since 2010, is expected to begin negotiating some form of debt relief by the end of the year.

Greece's bailouts have come at the price of wage cuts and tax rises that have driven up unemployment to more than double the euro zone average and worsened a six-year recession.

As part of the bailout, Greece must adjust wages in its public sector and dismiss workers based on performance, something which labour unions oppose.

ADEDY and private sector union GSEE have staged strikes repeatedly since the crisis broke out, with participation in some demonstrations reaching 100,000.

Turnout has been low in recent years mainly due to a growing mood of resignation and protest fatigue.