Public sector umbrella union said gov't efforts to reduce the 600,000-strong civil service at the behest of the EU and IMF bailing out Greece was "the most merciless plan" to eliminate worker rights. 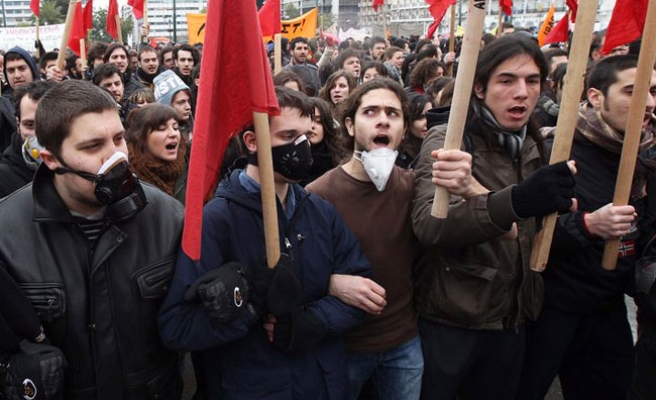 Greek public sector workers went on strike for the second time in a week on Tuesday, shutting schools and leaving hospitals with skeleton staff, as inspectors from Greece's foreign lenders checked whether the country was meeting its bailout targets.

Hiring in the civil service has long been considered driven by political patronage and Greece's creditors have said they will not dole out any more money unless Athens reforms a state apparatus accused of being spendthrift and corrupt.

From municipal police to teachers, workers began a 48-hour walkout against plans to cut thousands of public sector jobs, and they were also protesting over the killing of an anti-racism rapper by a supporter of the far-right Golden Dawn party.

ADEDY, the public sector umbrella union which organised the walkout, said government efforts to reduce the 600,000-strong civil service at the behest of the EU and IMF bailing out Greece was "the most merciless plan" to eliminate worker rights.

The government has dubbed the plan a "mobility scheme", meaning workers will have to find work in another department within eight months on a reduced salary, or be laid off.

The workers say the government is firing them indiscriminately at a time when Greece in enduring its worst peacetime crisis and record unemployment.

Blowing whistles and carrying banners reading, "No to human sacrifices", thousands of workers marched by the parliament. "Out with the bailouts and the bosses!" they chanted.

"The government must realise they can't fire people just like that," said 51-year-old Yiota Papadopoulou, a state high school teacher who worries about losing her job. "We were hired on merit, we have degrees, we weren't all hired on favours."

The administrative reform ministry must put a total of 25,000 workers in the mobility pool by the end of the year.

It has met an end-September target of 12,500 workers - mostly teachers, school guards and municipal staff, officials at the ministry told reporters.

The ministry has asked the trio of European Commission, International Monetary Fund and European Central Bank lenders to delay by two or three months an end-December deadline to do the same with the remaining 12,500 employees, the officials said.

The latest review by the lenders, who have propped up Greece with over 240 billion euros ($323.82 billion), will decide the size of a third bailout to see it through the crisis and is expected to last at least until the end of next month.

Backed by a vocal anti-bailout opposition which has openly called on citizens to take to the streets to overthrow the government, unions have stepped up protests in recent months.

Scores of municipal police dressed in black instead of their traditional green uniforms staged a mock funeral in Athens on Monday and somberly marched behind a hearse across the city centre, carrying wreaths and singing psalms.

The latest labour action also turned into a protest to mark the fatal stabbing of Pavlos Fissas by a self-proclaimed supporter of the Golden Dawn party last week.

ADEDY and its private sector union GSEE, which represent about 2.5 million workers, have brought people to the streets repeatedly since the financial crisis erupted in 2009 and plan to stage an anti-fascism rally in Syntagma Square on Wednesday.

"A massive presence will be the most resounding condemnation of the Golden Dawn murderers of Pavlos Fissas," Syriza said in a statement.

Golden Dawn denies involvement in the killing and says the 45-year-old attacker, who has been charged with murder, was not a member.

Golden Dawn is Greece's third most popular party and, in part, an outgrowth of discontent over state corruption and an economic crisis that has fuelled hostility towards immigrants.