Earlier, the Hong Kong stock exchange had said trade may resume if the signal is cancelled by 0400 GMT. 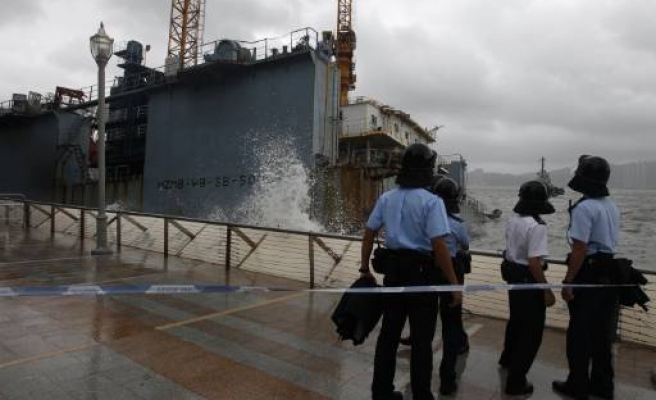 typhoon swept past Hong Kong on Thursday, closing markets, schools and most businesses in one of Asia's most important financial centres.

Government offices and schools are expected to remain closed for the rest of the day as Typhoon Nesat makes its way past Hong Kong en route to south China, after passing through the Philippines where it left at least 35 dead and 45 missing.

"Nesat is closest to Hong Kong now," the observatory said in a statement. "Gale winds are expected to persist over Hong Kong."

The Hong Kong Observatory's No.8 typhoon warning signal will remain in effect for most of the day, it said on its website. That means the city's financial markets will continue to be closed for the afternoon session.

Earlier, the Hong Kong stock exchange had said trade may resume if the signal is cancelled by 0400 GMT.

Hong Kong has a series of different typhoon warnings. Schools, businesses and government services stop when any No.8 or above typhoon warning is hoisted.

As of 0245 GMT, Nesat was centred about 350 kilometres (220 miles) southwest of Hong Kong, which saw winds of up to 121 kilometres per hour. The tropical cyclone on Tuesday hit the Philippines, where it also caused an estimated 100.3 million pesos ($2.3 million) in damage to agriculture.

No deaths were reported in Hong Kong, but local television showed footage of at least two people who were hospitalised after being hit by falling debris as a result of strong winds.

A ship weighing 1,677 deadweight tonnes ran aground in the early hours of Thursday morning, but there were no injuries, the Hong Kong Marine Department said.

Tropical cyclones regularly hit Hong Kong, the Philippines and other coastal regions of south China in summer and early in autumn.

Usually crowded streets were devoid of people as its iconic tram system stopped operations and the subway and bus systems cut trips. Trees fallen by strong winds blocked some roads, while taxis still plying the roads asked for extra fare.

Hong Kong's dominant airline Cathay Pacific said all its flights operating to and from the city were operating as normal. The Hong Kong International Airport's website showed at least 40 departing flights were delayed.

Ferry terminals that link Hong Kong to Macau, south China and outlying islands were also closed, the territory's government said in a statement.

Local television footage showed angry tourists gathered at the Hong Kong-Macau ferry terminal, with some waiting in despair while others crowded around ticket counters asking for their money back.

Neighbouring Macau was also affected, with schools and businesses at the former Portugese colony closed.