Ethnic-fuelled conflict has flared, oil money has been spirited away through corruption or squandered on war and a nation that sits on Sub-Saharan Africa's third biggest reserves of crude is sliding towards famine 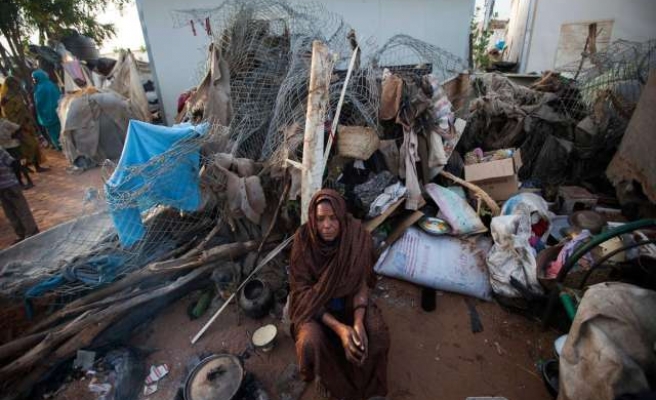 When South Sudan was born, the world's youngest country had generous Western allies and sturdy oil exports, a formula that offered a chance to build a modern economy and drag its people out of their daily struggle to feed themselves.

Three years on, ethnic-fuelled conflict has flared, oil money has been spirited away through corruption or squandered on war and a nation that sits on Sub-Saharan Africa's third biggest reserves of crude is sliding towards famine.

In the capital Juba, a muddy Nile trading post where new office blocks had begun rising, trading firms and banks that had sprung up now struggle to survive after nine months of fighting between government forces and rebels.

In the rural hinterland, where most of the country's 11 million people till tiny plots of land or herd cattle on traditional pastures, hopes of development entertained when South Sudan split from Sudan in 2011 have been dashed.

"We are just living as you can see, with no job, no money. We thought our independence from Sudan would mean our children would go to school and see no war," said Simon Koul, a 47-year-old father of five in a Juba camp, one of an estimated 1.3 million people who have fled their homes due to fighting.

By year end, a third of the nation could face the threat of starvation. Already, almost 180,000 children between 6 months old and five years are being treated for severe acute malnutrition. Mothers are more likely to die in childbirth than anywhere else in the world, according to U.N. statistics.

"There was no country on earth that had a larger score of goodwill than South Sudan," Thomas Shannon, a U.S. State Department envoy for Africa, told Reuters. "But beginning in December it has been spending that goodwill at record speed."

The United States had heralded South Sudan's independence as a foreign policy success and, with other Western donors such as Britain and Norway, poured in aid, helping spur a mini-boom in the capital that was meant to spread to the rest of the nation.

Now Western and regional African diplomats talk of mounting frustration at President Salva Kiir and the deputy he sacked last year, Riek Machar, as they continue to command rival forces in battle. Nascent businesses that might have brought a modern economy are buckling under the pressure.

"There is fear. People don't want to expand their businesses, and those who are operating in the crisis areas, they lost a lot," said Bruna Siricio, deputy managing director of locally-owned Ivory Bank.

The bank moved its headquarters from Sudan's capital Khartoum to the south's capital Juba in 2009 to take advantage of the opportunities that independence would bring, but now faces a stark reality.

In a country where only a tiny fraction of the population had ever had a bank account, Ivory Bank set up branches in remote locations. Government employees could be paid their salaries directly into their accounts, which could be used as guarantees for loans.

Now, its branches in war-torn towns of Malakal, Bentiu and Bor, north of Juba, have shut. The government has stopped transferring salaries to customer accounts to avoid paying workers who rebelled, so many loans are not being serviced.

This month the bank advertised in newspapers telling defaulters to report to the bank or face legal action. Siricio said the bank had stopped all lending for the next three months.

"We are concentrating on collection," Siricio said at the bank's headquarters, which like other firms relies on a private generator for power in a nation where experts say just 1 percent of the population are connected to the grid.

One of the biggest challenges for banks and businesses is securing foreign exchange to pay for purchases abroad. Scarcity has a swift impact on the land-locked economy that relies heavily on imports from neighbours such as Kenya and Uganda.

The central bank initially reduced dollar sales to banks to fund letters of credit, and has now stopped such sales completely, bankers say. That makes it harder for importers to buy goods. While the official exchange rate is 2.95 pounds to the dollar, the cost of a dollar on the black market has risen from 3.50 pounds before the fighting to around 5 pounds now.

"I have South Sudanese pounds but it's harder for us to get dollars from the bank," said Abjata Abdi Abdullah, a Kenyan trader who needs hard currency to import clothes for his shop.

The currency shortage has led to rising prices and decreased availability of imported food, pushing the country further towards hunger.

John Semolina, a Ugandan grains store owner in Juba's Konyo Konyo market, said the dollar shortage means he has cut back on imports of maize and sugar, having a knock on effect on prices and availability down the supply chain.

"Sometimes it takes so long to find money to pay suppliers in Uganda," he said.

Bishar Oman, who sells electronics, said the steady pound weakening had pushed up the price of his laptops, mobile phones and other devices, so now even fewer customers can afford them.

South Sudan should be flush with cash from oil exports. But its savings have been plundered, after about $5 billion of reserves was taken by officials in the years shortly before and after independence. Diplomats said efforts to recover the funds retrieved little of the missing cash.

Officials suggest a large chunk of the income that still flows now goes on the war effort, halting development projects in a country the size of France with almost no tarmac roads and barely any public services.

Officials do not offer full details on spending, but parliamentary deputy Onyoti Agigo Nyikwac said about four fifths of a supplementary budget worth $700 million went on "security".

One member of parliament said the government had to buy more guns after rebels emptied armouries when they deserted. Officials deny the government has bought weapons since fighting began but acknowledge priorities have changed.

"During this crisis, the demand for foreign currency has shifted from normal trade to other activities," said Ukuni Paul Omseon, a project officer for a Finance Ministry department that helps private business. He cited funding for "emergencies".

The government said in July it planned to borrow about $1 billion from oil firms to help it balance the budget.

Some of the dollars that do make it into the market come via U.N. and other aid agency workers, as the aid groups ramp up activities to avert a deepening humanitarian disaster.

Mabior Deng, 29-year-old South Sudanese exchange dealer, makes a tidy income buying dollars from workers at the United Nations at a rate of 4.65 pounds and then selling them on for more. "I get my profit from there," he said.