Tomato, along with the six other small savings banks, had attracted customers by paying higher interest than mainstream banks. 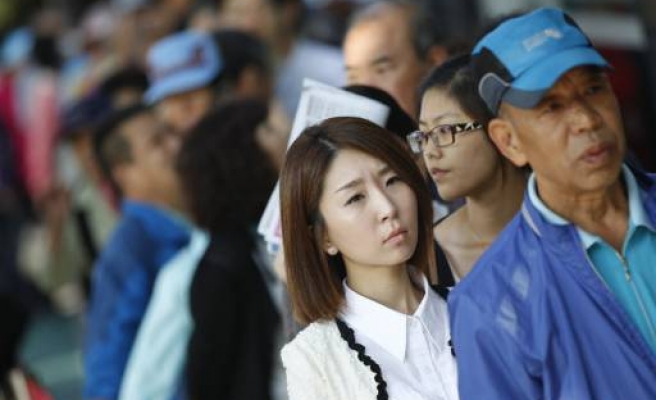 Hundreds of worried customers queued overnight to withdraw their money from seven South Korean savings banks which had been suspended from operations due to concerns about their financial strength.

South of the capital Seoul, a crowd more than 800 people, mostly in their 60s and 70s, gathered outside one of the banks suspended by South Korean authorities on Sunday. Thursday was the first day depositors could withdraw their funds.

"I arrived here late last night, though I could barely stand due to osteoporosis," 72-year old grandmother Park Geum-Rae told Reuters as she queued for he money at Tomato Savings Bank.

"I lost my 5-year-old grandson in the hustle and bustle... but fortunately, I found him sleeping under the roof of ticket office at the parking lot behind the bank."

Tomato, along with the six other small savings banks, had attracted customers by paying higher interest than mainstream banks.

But the banks are heavily exposed to loans made to the country's ailing construction sector and suffer from a lack of capital, leading regulators to temporarily shut them down.

Concerns about the security of deposits spread to other small banks, although the pace of withdrawals had started to slow by the time depositors could get their hands on their money in the seven suspended banks.

A combined 40.8 billion Korean won ($35.5 million) in deposits had been withdrawn from 91 savings banks as of noon on Thursday, according to South Korea's financial regulator.

Credit ratings agency Standard & Poor's said after the suspension that the problems in the sector did not represent any systemic risk to the financial system. The seven suspended banks account for 0.8 percent of South Korea's deposits, S&P said.

Customers are eligible to recover provisional deposits of up to 20 million Korean won ($17,393) each until November. Big lenders such as Kookmin Bank are to help provide money for customers at closed savings banks.

The crisis has however claimed the job of one of President Lee Myung-bak's aides and caused ripples through the ruling Grand National Party which faces parliamentary and presidential elections in 2012.

"I don't know what the government is doing about this issue, why are we suffering this pain? I think the government has to be changed next year," said Im Dae-ok, a 65-year old retired man who was queuing for his money.

Customers were given the opportunity to use Internet banking services to get their money back, but for many of the older customers who queued at Tomato overnight, hard cash in hand was what they wanted.

"I know there is the Internet application service for refunds, though I'm too old to use it. I'm not interested in studying the Internet, all I want is my money back," said Lee Sun-min, a-68-year old man.