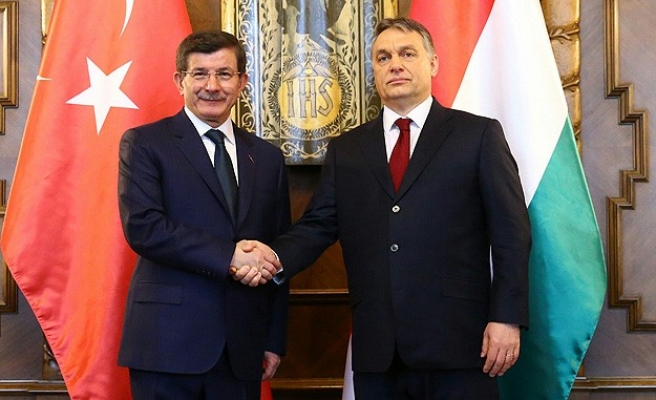 Hungarian Prime Minister Viktor Orban said Tuesday that he preferred Russian natural gas to be delivered to Central Europe and Hungary through Turkey.

"We want the gas to be delivered through Turkey over Serbia to Central Europe and Hungary," he said in a joint press conference with his Turkish counterpart Ahmet Davutoglu in the Hungarian capital Budapest.

The remarks came following the second meeting of the Turkey-Hungary High Level Strategic Cooperation Council, co-chaired by Davutoglu and Orban at the Prime Ministry Office at the Hungarian Parliament.

Orban stressed that the recent developments in Ukraine had made Turkey a more significant and valuable country for energy transfer.

"We will face a great uncertainty in case we receive no gas through Ukraine," he said.

Turkey has lately been the focus of several natural gas transfer projects.

Russian President Vladimir Putin scrapped a South Stream gas pipeline project on Dec. 1, 2014, which would have carried Russian natural gas via Bulgaria to southern and central Europe. Instead, he proposed a new pipeline route through Turkey, which is now referred to as the Turkish Stream.

Recalling discussions over an alternative route for a new gas pipeline, the Hungarian premier said he preferred a pipeline that would transfer Russian natural gas via Turkey to Hungary.

"We are ready for any cooperation both in natural gas and nuclear energy along with the joint energy activities of our oil companies in third countries like Russia," he said.

Although it was put into effect in 2009, Turkish premier said Nabucco project did not yield the desired result because of the "weakness of the EU's energy perspective."

Orban highlighted that Turkey and Hungary had demanded that the EU consider the Nabucco project, a pipeline which would have transferred natural gas from the Turkish-Bulgarian border to Austria. But, he indicated, the EU had rejected it.

The Nabucco gas bridge project aimed to connect the world’s richest gas regions, the Shah II sea field in Azerbaijan in the Caspian region and Middle East to the European consumer markets.

The two countries will cooperate in training experts in nuclear energy, the Hungarian PM confirmed.

As for bilateral economic ties, the two premiers both reiterated that they were aiming to increase their trade volume, which was at around $2 billion in 2014, to reach $5 billion as soon as possible.

Davutoglu called it a significant step that Hungary's Eximbank will open a representative office in Istanbul, adding that Turkey is also preparing to take a similar step in Budapest.

Moreover, Davutoglu said they aimed at establishing a direct transportation route between Budapest and Istanbul via the Danube River, along with high speed train lines.

Following the Strategic Cooperation Council meeting, officials of the two countries signed several agreements including the reconstruction of Gul Baba Tomb, as well as a tentative agreement on energy research and on the development on the use of nuclear energy for peaceful purposes.

Davutoglu is also scheduled to visit the Gul Baba Tomb and the Galicia Cemetery for Turkish Martyrs in Budapest. Gul Baba was a 16th century dervish poet.