The G20 leaders summit in Australia is setting up as a showdown between Western leaders and Russian President Vladimir Putin, following fresh reports of Russian troops pouring into eastern Ukraine. 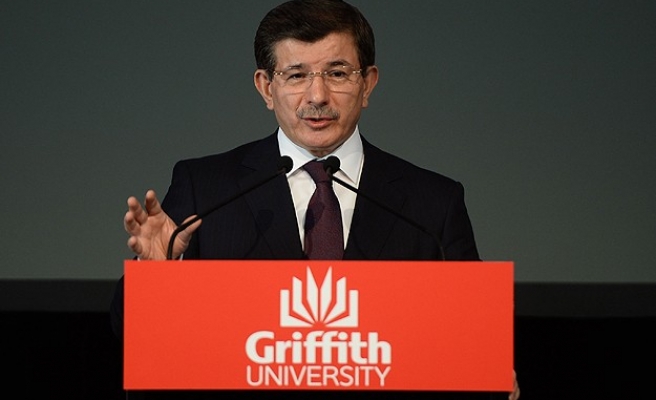 Turkish Prime Minister Ahmet Davutoglu on Friday called for a more inclusive Group of 20 forum, saying it would give low income nations a stronger voice when it takes over the presidency for 2015.

Davutoglu also indicated that Turkey would expand the G20's role beyond economic cooperation and decision-making to issues such as the refugee crisis in eastern Europe, the Ebola outbreak in Africa and terrorism in the Middle East.

"During our presidency we want to be the voice of everybody," Davutoglu said at a conference in Brisbane where he is due to attend the weekend G20 Leaders Summit.

Turkey's more inclusive agenda contrasts with that of current host Australia, which has attempted to impose a tight focus on the disparate grouping with a pledge to increase collective global economic growth by an extra 2 percent over five years to 2017.

Davutoglu said Turkey would continue to press that goal, but underscored the importance of talking about geopolitical issues at the group's gathering.

"If the G20 agenda is only limited to financial issues, the G20 cannot function, it cannot have international legitimacy," he said.

Davutoglu also diverged from current chair Australia on the issue of climate change, saying it was imperative to agree a U.N.-mandated goal to curb carbon emissions. Australia has attempted to keep climate change issues off the G20 agenda.

Ankara takes over the presidency in December, it has the opportunity to be the first country to effectively lead the grouping from an emerging market point of view.

Russia's chairmanship last year was viewed by many analysts as a failure, while both Mexico and South Korea were too caught up in a necessary focus on world crises to set a defining agenda.

Davutoglu said trade and infrastructure would also be high on the agenda next year, linking these financial issues to a range of geopolitical issues such as the the influx of Syrian refugees into Turkey.

"We spent $4.5 billion for those refugees in three years," he said.

The G20 leaders summit in Australia starting on Saturday is setting up as a showdown between Western leaders and Russian President Vladimir Putin, following fresh reports of Russian troops pouring into eastern Ukraine.

Ukraine has accused Russia of sending soldiers and weapons to help separatist rebels in eastern Ukraine launch a new offensive in a conflict that has killed more than 4,000 people.

British Prime Minister David Cameron blasted Russia's actions as unacceptable on Friday, warning that they could draw greater sanctions from the United States and the European Union.

"I would still hope that the Russians will see sense and recognise that they should allow Ukraine to develop as an independent and free country, free to make its choices," Cameron told reporters in Canberra.

But increasing violence, truce violations and reports of unmarked armed convoys travelling from the direction of the Russian border have aroused fears that a shaky Sept. 5 truce could collapse.

But with much of the economic agenda agreed and a climate change deal signed last week in Beijing between the United States and China, security concerns are moving to centre-stage.

Ukraine has not been a top focus during a pair of summits in Asia this past week, U.S. Deputy National Security Advisor Ben Rhodes said, although President Barack Obama did raise it briefly with Putin when both attended the Asia Pacific Economic Cooperation forum in China.

Obama arrives in Brisbane on Saturday and will be discussing his frustration over Ukraine with a key bloc including German Chancellor Angela Merkel, French President Francois Hollande and Cameron.

"They've been key towards sending a shared message to the Russians and the Ukrainian government," Rhodes told reporters. "So it will be an opportunity for him to check in with them."

There had been calls from some in Australia to block Putin from attending the summit given Russia's actions in Ukraine and the downing of Malaysia Airlines Flight MH17 by Russian-backed rebels, but the overwhelming consensus was against it.

News reports that a convoy of Russian warships had arrived earlier this week in international waters north of Brisbane, the venue of the summit, also created a flutter.

Australian Prime Minister Tony Abbott said it was unusual but not unprecedented for the Russian navy to be so far south.

"Let's not forget that Russia has been much more militarily assertive in recent times," he said on Thursday. "We're seeing, regrettably, a great deal of Russian assertiveness right now in Ukraine."

Merkel, speaking to reporters in Auckland, played down any threat posed by the warships but joined the leaders speaking out against Putin ahead of his arrival in Brisbane on Friday evening.

"What is concerning me quite more is that the territorial integrity of Ukraine is being violated and that the agreement of Minsk is not followed," she said, referring to the truce accord.

In addition to Ukraine, the crises in the Middle East are threatening to overshadow the economic agenda.

British nationals who become foreign fighters abroad could be prevented from returning home under new laws to deal with militants fighting in conflicts like Iraq and Syria, Cameron said in an address to the Australian parliament on Friday.

As host, Australia will continue pushing its growth agenda despite growing security tensions.

"The focus of this G20 will be on growth and jobs," Abbott said at a press conference with Cameron. "You can't have prosperity without security."

Canberra is pushing for an increase in global growth targets of 2 percent by 2018 to create millions of jobs and that goal appears on track. Over 1,000 policy initiatives proosed by G20 nations should add around 2.1 percent, the head of the Paris-based Organisation for Economic Co-operation and Development (OECD) said.

Taxation arrangements of global companies such as Google Inc , Apple Inc and Amazon.com Inc have become a hot political topic following media and parliamentary investigations into how many companies reduce their tax bills.

The OECD has unveiled a series of measures that could stop companies from employing many commonly used practices to shift profits into low-tax centres.