As part of the Geneva deal, U.S. sanctions have been eased on NITC for oil exports granted under waivers to specific buyer countries, but EU sanctions on the carrier remain in place 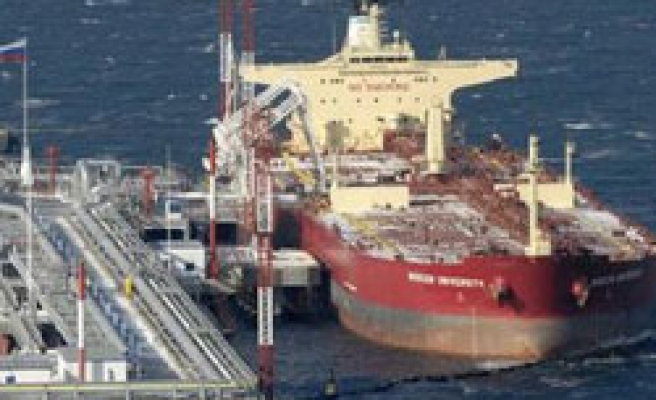 Iran's oil tanker fleet is gearing up for more business, with some vessels taking to the high seas after over more than a year at home ports, another sign that an easing in Western sanctions is enabling exports to begin to pick up.

Iran and Western governments reached an interim agreement in November to restrict Tehran's disputed atomic work in exchange for limited sanctions relief for six months, which came into effect in January.

U.S. and European sanctions imposed in the previous two years had sharply hit Iran's oil exports, mainly by making it difficult for buyers to arrange financing for transactions and insurance and documentation for shipments.

The Geneva deal included an easing on restrictions on ship insurance and allows for less difficult shipping of oil that the OPEC member is permitted to sell to buyers mainly in Asia.

Ship tracking sources say in recent weeks at least three Iranian supertankers had made their first trips to Asia after months at Iranian anchorages where they were storing unsold oil. The tankers, known as Very Large Crude Carriers (VLCCs), can hold up to 2 million barrels of oil each.

"While all eyes will be on whether we see an extension in sanctions relief after July, Iran's fleet is more visible and active now," one shipping industry source said.

Tanker tracking sources told Reuters this week Iran's oil exports have risen further this month for a fourth consecutive month, increasing by around 100,000 barrels per day (bpd) to at least 1.30 million bpd for February, just over half the pre-sanctions rate from 2011.

Another NITC tanker, Alert, is currently in a dry dock in Oman for repairs.

"The enlarged NITC VLCC fleet will be able to go about its business without all of the subterfuge which has been apparent over the past few years. Initially, we are likely to see more VLCC cargoes heading East, freeing up the units which have formed the nucleus of the long-term Iranian floating storage fleet," tanker broker EA Gibson said in a recent report.

"It is also likely that NITC will take the opportunity to undertake dry docking and repairs to many of the older tankers during the sanction suspension window."

The sanctions prohibit dealings by U.S. and European companies with a list of firms that includes NITC, and companies from third countries that have dealt with NITC have themselves been added to the sanctions list.

Over the past few years NITC frequently changed the name of its vessels and flags to conceal its activity. Its a fleet of 37 supertankers and 14 smaller tankers has an overall carrying capacity of around 86 million barrels of oil.

"The way NITC seems to be operating is as near to the pattern of a normal operator as possible - bearing in mind sanctions have prevented them having access to facilities in most other countries," said Richard Hurley, a senior analyst at IHS Maritime.

"We have not seen any renaming activity recently. Previously we have seen a renaming every six to eight months. They should be due for a renaming but that does not seem to be happening."

As part of the Geneva deal, U.S. sanctions have been eased on NITC for oil exports granted under waivers to specific buyer countries, but EU sanctions on the carrier remain in place.

NITC's managing director Ali Akbar Safa'ie was quoted by Iranian media in recent weeks as saying Iran's oil exports "are done currently with the country's tankers" with no need to use foreign vessels. He said there were fewer obstacles for exports to key clients including India and China due to the limited relief provided by the November deal.

When contacted, a senior NITC official said: "We are optimistic that everything is going to be okay. For the time being, things are as they were before."

Among vessels also being used by Iran are some previously controlled by Irano Hind, an Indian-Iranian joint venture recently wound up due to sanctions, trade sources said. The former company's fleet included at least three oil tankers.

"Any return of Iranian flows would represent somewhat of a double-edged sword for the tanker market: more transportation volume, but also more vessels available due to reduced floating storage," he said.

World powers have aimed to keep exports close to 1 million bpd to maintain pressure on Iran to abandon its nuclear programme. A return to Iran's pre-sanction export level of around 2.2 million bpd is some way off.

Tehran faces hurdles ahead as many top ship insurers still balk at providing cover for Iranian oil cargoes, arguing that regulations are unclear over any potential claims process once the current six-month easing of sanctions ends in July.

"The main point for insurers ... is the absence of confirmation from the U.S. or Europe that insurers will be able to respond post 20 July to claims/liabilities arising during the six-month suspension period," said Andrew Bardot, executive officer of the International Group of P&I clubs, an association whose members insure the majority of the world's tanker fleet.

"Which renders any cover provided during this period potentially and in all probability worthless."

Vessels transporting Iranian crude have previously been left with limited alternatives, mostly set up by importers.

"While many insurers still remain wary of returning to the market given the short six-month window on sanctions relief permitted by the interim Geneva agreement, any perception that the agreement will be renewed for an additional six months, or more, beyond the July 2014 deadline will encourage more to do so," said Mark Dubowitz, of U.S.-based think-tank the Foundation for Defense of Democracies, which supports tough sanctions on Iran.

"Already, we are starting to see NITC ... beginning to make its first journeys in over a year. Any further easing of sanctions may encourage insurers to jump back into the market and allow NITC to come in from the cold."