Italian exit from euro would be disaster- Berlusconi

Berlusconi alarmed many observers earlier this year by musing openly about Italy quitting the euro zone, but he told the French newspaper Liberation in an interview that his remarks had been misreported. 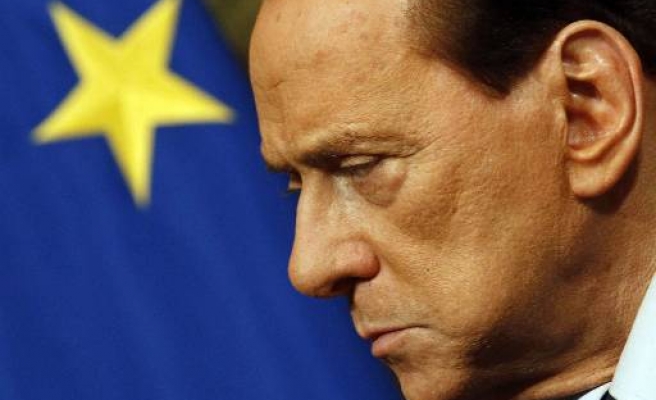 Former Italian prime minister Silvio Berlusconi said on Saturday his People of Freedom (PDL) party firmly opposed Italy leaving the euro and believed such a policy would be disastrous.

Berlusconi alarmed many observers earlier this year by musing openly about Italy quitting the euro zone, but he told the French newspaper Liberation in an interview that his remarks had been misreported.

He said some members of his party had raised the possibility just to put pressure on Germany to relent with its demands for painful fiscal austerity.

"I always said that the exit of one or more of its members would mean the disintegration of the euro zone. It would mean the failure of a historic project to unify Europe and no one could want that," he said. "Within the PDL, we all consider that an exit from the euro would be a disaster."

Berlusconi, who resigned last November to cede the premiership to technocrat Mario Monti, also said he had not yet decided whether to lead his party in next April's general election.

"It's a fact that the whole party, starting with the members of parliament, are asking me to come back to benefit from my popularity at the general election," said the 75-year-old billionaire, who has served three times as prime minister.

"I have not yet decided but one thing is for sure: I have always been at the service of my country."

The PDL's parliamentary leader, Fabrizio Cicchito, said last month that Berlusconi would be the party's candidate. The Mediaset magnate has kept a low profile since resigning in the middle of financial turmoil that risked tipping the euro zone's third largest economy into a Greek-style crisis.

Monti has ruled out running in next year's election and polls suggest a centre-left bloc around the Democratic Party would win, with the PDL battling for second place with the maverick 5 Star movement led by former comedian Beppe Grillo.

Berlusconi told Liberation the country's left had not modernised itself and was stuck with an outdated tax-and-spend model ill-suited to Italy's troubled economic situation.

"What pushes me to remain active is a sense of responsibility toward my country and, perhaps, the bitterness of not having accomplished everything which I wanted," he said.

Berlusconi, on trial on allegations of paying for sex with a teenager, said he was a victim of "a lynching for political ends".

"Nothing strange took place, just some friends who came to my house with admirers - none of whom was an escort girl - for some dinners which were perfectly calm," he told the newspaper.