At an emergency evening cabinet meeting, the government adopted an austerity package worth 20 billion euros in 2012. 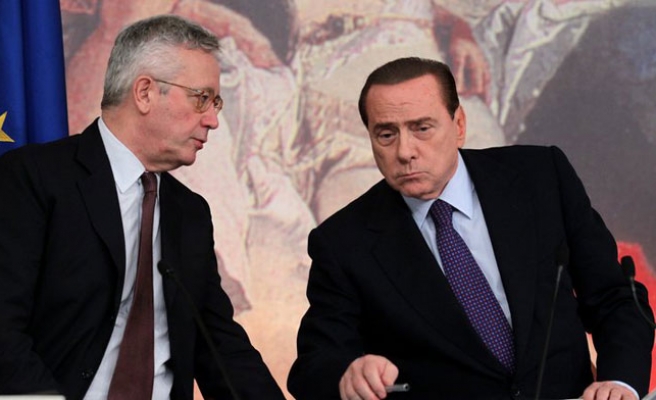 At an emergency evening cabinet meeting, the government adopted an austerity package worth 20 billion euros in 2012 and a further 25.5 billion euros the following year to bring the budget into balance in 2013.

The measures ranged from a special levy on incomes above 90,000 euros to higher taxes on income from financial investments and cuts in the cost of government, notably through a cull in the number of local politicians.

The ECB demanded accelerated deficit cuts from Italy as a condition for buying its bonds on the market after a sell-off sent Italian borrowing costs soaring and threatened to put the euro zone's debt crisis on a new, unmanageable plane.

Berlusconi, who frequently boasts of "never putting his hand in the pockets of Italians", said he agreed to the tax increases only reluctantly and the decision made his "heart drip blood".

"We are personally very pained to have to adopt these measures," he told reporters after the cabinet had approved the plan.

After days of criticism for a lack of clarity over how it intended to meet the balanced budget target, Berlusconi and Economy Minister Giulio Tremonti delivered a harsh dose of austerity for Italy's fragile economy.

Before the announcement, Italy's biggest unions had pledged to oppose measures which hurt ordinary Italians including pensioners.

"The tax hikes certainly won't help the economy, which is already stagnating, and consumer confidence is sure to fall further," said Raj Badiani, an economist at IHS Global Insight.

"The new fiscal measures appear to be credible, but the real problem is on the reform front. We need a timeline for measures to liberalise the service sector and labour markets."

Barclays Capital cut its forecast for Italian economic growth in 2012 to 0.7 percent, just over half the government's official 1.3 percent forecast.

The package, adopted by emergency decree, must now be approved by parliament within 60 days. More details may emerge at a news conference called by Tremonti on 0900 GMT on Saturday.

Despite a huge public debt, Italy, the euro zone's third largest economy, had kept out of the crisis until last month when doubts over its slack growth and the government's ability to control finances triggered the selloff of Italian bonds.

"The austerity plan is not perfect but it's probably the best we could have hoped for in the current political situation with resistance from inside and outside the ruling coalition, and considering they had to re-formulate everything in a week," said Chiara Corsa, an analyst with UniCredit in Milan.

The extent of the cuts underlines how far the government has been pushed since markets turned on Italy last month, dragging it close to a Greek-style emergency.

Market panic has eased since the ECB stepped into the market, bringing Italian bond yields back down from the 14-year highs they hit last week but wild swings on the stock market have underlined the persistent fear among investors.

Tremonti said there was no alternative to the measures if markets were to be reassured, and added that his new deficit targets were prudent.

The budget deficit will fall to 1.4 percent of gross domestic product in 2012 from 3.8 percent this year, and be eliminated in 2013, he said.

In a sign of how much pain the steps will impose on ordinary Italians, regional government leaders, who will bear a large part of the cuts, condemned the measures as unjust.

Berlusconi rejected the idea of a "wealth tax" on private assets but the planned "solidarity tax" on high earners is clearly aimed at showing that sacrifices are being shared.

Little detail was offered on measures to stimulate growth but Labour Minister Maurizio Sacconi said they included moves to make it easier to strike labour deals at the company or regional level, a key element in freeing up the rigid system of centralised contracts.

The plan also aims to curb tax evasion and brings forward measures to raise the retirement age for women in the private sector, originally programmed to begin in 2020 but which will now start in 2016.

Additional measures include a rule ensuring that non-religious public holidays, such as the June 2 anniversary of the founding of the Italian Republic, are celebrated on a Sunday to increase the number of working days in a year.