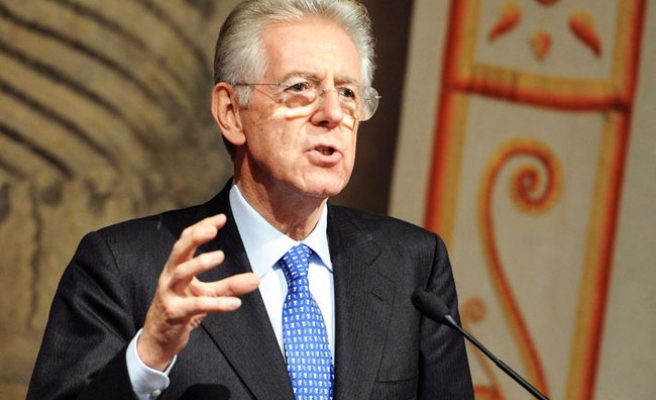 Italy said on Tuesday it may want to tap euro zone aid to ease its borrowing costs as finance ministers struggled to convince markets they are getting a grip on the bloc's debt crisis, which a top European Central Banker said could escalate.

Prime Minister Mario Monti, who is under intense market pressure to shape up his economy and avoid being drawn into the center of the debt crisis, said Italy could be interested in tapping the euro zone's rescue fund for bond support.

"It would be hazardous to say that Italy would never use (this mechanism)," he said after a meeting of European finance ministers in Brussels. "Italy may be interested."

He is worried by a rise in Italian bond yields, which were slightly below 6 percent on Tuesday having bounced above the day before. A sustained period above that threshold could open the way to 7 percent, beyond which servicing costs are widely deemed unsustainable.

Monti's comments show the 2-1/2 year-old euro zone crisis risks engulfing Italy, the bloc's third-largest economy and a member of the Group of Seven economic powers that is widely viewed as too big to bail out.

Overnight, finance ministers outlined an aid package for Spain - the euro zone's fourth-largest economy - but they struggled to convince markets it would help stabilize the bloc.

The ministers agreed to grant Madrid an extra year until 2014 to reach its deficit reduction targets in exchange for further budget savings. They also set the parameters of an aid package for Spain's ailing banks.

The decisions were aimed at preventing Spain, mired in a worsening recession, from needing a full state bailout which would stretch the limits of Europe's rescue fund and plunge it deeper into a debt crisis.

Markets were disappointed the meeting did not offer more. The euro initially traded near a two-year trough against the dollar and hit a five-week low versus the yen, with sentiment edgy as the focus shifted to a German court hearing.

Germany's top court also addressed whether Europe's new bailout fund and budget rules are compatible with national law in a process influencing not just how to tackle the euro zone crisis, but how much deeper European integration can go.

The hearing into complaints about the fund, the European Stability Mechanism (ESM), and fiscal pact may indicate how long the court will keep Europe on tenterhooks.

Anything more than a few weeks would mean a serious delay to implementing the ESM, which has already been postponed from July 1, and raise serious doubts about whether Europe will really get the extra firepower it needs to combat the crisis.

"A considerable postponement of the ESM (bailout fund) which was foreseen for July this year could cause considerable further uncertainty on markets beyond Germany and a considerable loss of trust in the euro zone's ability to make necessary decisions in an appropriate timeframe," German Finance Minister Wolfgang Schaeuble told the court.

Bundesbank President Jens Weidmann, a member of the ECB's policymaking Governing Council, went further and said a speedy ratification of the ESM fund and rules on budget discipline was no guarantee that the euro zone debt crisis would not worsen.

"A temporary ruling does not ensure that the risks can be comprehensively limited. Conversely, a quick ratification is no guarantee that the crisis will not escalate further," Weidmann told the court.

Keeping up the pressure on Monti, the International Monetary Fund said Italy must continue down the road to reform the economy Monti began when he took over last year.

At their meeting overnight, euro zone finance ministers did not agree a final figure for aid to ailing Spanish lenders, weighed down by bad debts due to a housing crash and recession, but the EU has set a maximum of 100 billion euros ($123 billion) and some 30 billion euros would be available by the end of July if there was an urgent need.

A final loan agreement will be signed on or around July 20, Eurogroup Chairman Jean-Claude Juncker told a news conference.

Luxembourg Finance Minister Luc Frieden said the 100 billion euros available to Spanish banks was much more than they needed.

"There's no emergency here, there's a clear path towards stabilization," said Frieden. "The markets have to realize that the money is there, more money than is necessary."

In one key decision watched by investors, ministers agreed overnight that once a single European banking supervisor is set up next year, Spanish banks could be directly recapitalized from the euro zone rescue fund without requiring a state guarantee.

That fulfils an EU summit mandate to try to break a so-called "doom loop" of mutual dependency between weak banks and over indebted sovereigns, but represented a climbdown for hardline north European creditor countries.

The Eurogroup ministers were tasked with fleshing out a bare-bones agreement reached by EU leaders at a summit last month on establishing a European banking supervisor and using the bloc's rescue funds to stabilize bond markets.

But differences persisted between north European countries such as Finland and the Netherlands and southern states led by Italy and Spain.

EU finance ministers formally agreed on Tuesday to give Spain another year to bring its budget deficit down to within the EU's 3 percent of GDP ceiling, giving Madrid some oxygen, but even the new targets could be difficult to reach.

In a vote, ministers fixed Spain's deficit goals at 6.3 percent of GDP for this year, 4.5 percent for 2013 and 2.8 percent for 2014. Spain had originally been expected to reach the 3-percent level in 2013 and could face EU sanctions if it fails to meet its goals again.

Greece's new Finance Minister Yannis Stournaras told Reuters Television that he wanted to get his country's adjustment program back on track before requesting any kind of extension to a 130 billion-euro bailout from the EU and IMF.

Athens' second rescue envisages it returning to markets in 2015, but a five-year recession makes that look unlikely and the country may need more time to bring down its debt and regain investor confidence. Stournaras' stance appeared to mark a more measured tone. Last month the new Greek government said it wanted a two-year extension.

"We want to bring the program back on track and then we will see what kind of extension we can have," he said. "We have put forward the issue. The size of the recession justifies - as Spain got an extension - that we should get an extension."