"A greater degree of integration and consolidation of public finances in Europe is necessary," Tremonti told a news conference to explain the austerity package. 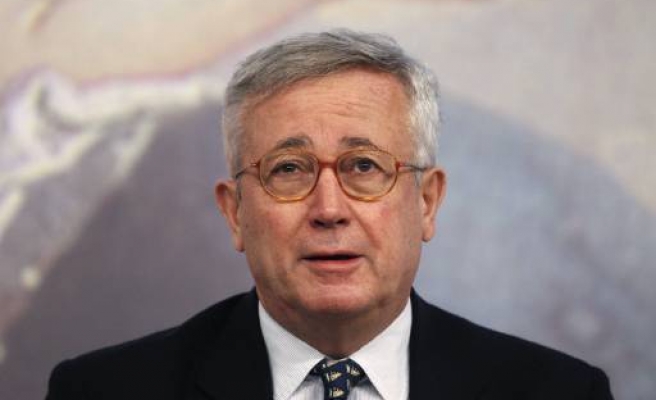 Britain's finance minister called for some form of fiscal union to resolve the euro zone's debt crisis on Saturday, while his Italian counterpart renewed a call for the introduction of common euro zone bonds.

After more than a year of piecemeal responses to the euro zone's still-expanding debt crisis, some economists and policymakers are making the case for broader changes to how the currency bloc works.

The spread of market concerns in the crisis to France in the past week have raised the stakes further ahead of a meeting of the bloc's French and German leaders next week -- both of whom have opposed more radical moves to date.

UK Chancellor George Osborne said deeper integration had been the inevitable conclusion from the start of the single currency project.

Asked if the only answer for the health of the euro zone was some kind of fiscal union, he told BBC radio: "The short answer is yes."

"I was against Britain joining the single currency. One of the reasons ... was because i thought the remorseless logic of having a single currency is you end up having something akin to a single budget policy. You can't have one without the other," Osborne said on Saturday.

"An unstable euro is very bad news for us, we have to ensure that our influence on important decisions like financial services is not undermined. But we do yes have to allow greater fiscal union while protecting our own national interest."

Britain has held onto its pound currency and is only part of discussions over the European debt crisis as a member of the broader European Union.

Italian Economy Minister Giulio Tremonti, however, also renewed a call for common European bonds on Saturday, saying they would be the best solution for a debt crisis which he said still risked spreading to other countries.

Speaking a day after the government adopted a 45.5 billion euro package of spending cuts and tax hikes aimed at restoring confidence in Italy's public finances, Tremonti made a renewed plea for common debt issuance in the euro zone.

"A greater degree of integration and consolidation of public finances in Europe is necessary," Tremonti told a news conference to explain the austerity package.

Tremonti noted that he and Luxembourg Prime Minister Jean-Claude Juncker had long argued in favour of joint euro bonds and he believed the trend was pointing towards closer coordination of fiscal policies.

"We expect developments which we think could and should take us in a direction towards fiscal consolidation and integration in Europe," he said.

The issue of common European debt would allow weaker and more indebted states to benefit from the higher rating of countries like Germany to issue debt more cheaply.

But Germany and France have so far opposed any common debt issuance, arguing that it would remove a key driver of fiscal discipline in individual member states and push up their own borrowing costs as AAA-rated sovereigns.