ISTAT gave no numerical breakdown of GDP components with its preliminary estimate, saying only that activity contracted in agriculture, industry and services. 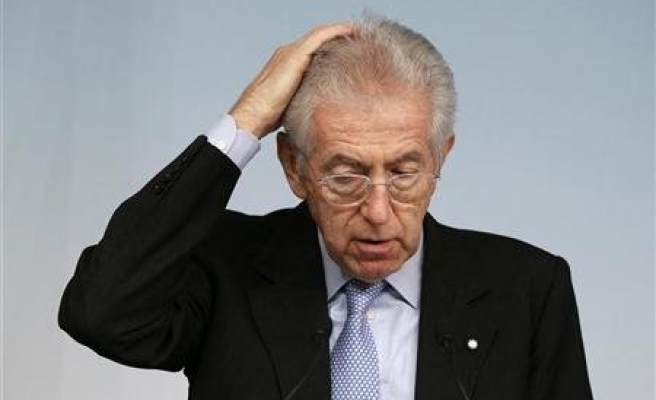 Italy shrank further into recession in the second quarter for a 2.5 percent yearly decline, data showed on Tuesday, threatening attempts by Mario Monti's technocrat government to control a debt crisis that is undermining the whole euro zone.

A 0.7 percent fall in gross domestic product, only slightly better than the first quarter's 0.8 percent decline, means the Group of Seven economy has now been contracting for at least a year, according tofigures from government agency ISTAT.

This will weaken tax revenues and hit jobs and consumer spending, a vicious circle which makes it harder for Monti, who is aiming to cut the budget deficit to 0.1 percent of GDP in 2014, to meet his public finance goals.

Italy has been the euro zone's most sluggish economy for more than a decade and is at the fore front of the debt crisis, with borrowing costs bordering levels seen unsustainable over the long run.

Investors have become increasingly concerned about Italy's ability to bring down public debt of around 123 percent of output - a mood that threatens to spill further into the bloc.

Monti passed austerity measures worth more than 20 billion euros at the end of last year to head off a mounting debt crisis but the package, made up largely of tax hikes, sapped consumer morale and deepened the recession.

"The austerity measures are obviously weighing on the economy," said Vincenzo Bova of MPS Capital Services. "Investments and consumption, both private and public, are the hardest-hit areas."

Tuesday's data was slightly weaker than expectations. The median forecast in a Reuters survey of analysts pointed to a 0.6 percent fall.

It may have been weakened in the second quarter by a powerful earthquake that crippled industry in the productive northern region of Emilia-Romagna, but analysts saw the decline continuing.

"There is no sign of any change of trend for Italy," said Intesa Sanpaolo analyst Annamaria Grimaldi, who forecast there would be no return to growth in the euro zone's third-largest economy until "well into 2013".

Employers' lobby Confindustria forecasts the economy will contract by more than 2.4 percent this year, twice as much as the government's official projection of -1.2 percent.

With Italian benchmark bond yields still stubbornly close to 6 percent, Monti has repeatedly warned his European partners that unless they show flexibility towards Italy on public finances, the country could soon be run by a eurosceptic government with little commitment to fiscal consolidation.

He told German weekly Der Spiegel on Sunday that what he needed from Germany and the EU was moral support, not financial help, and added that he was concerned about growing anti-euro, anti-German and anti-EU sentiment in the parliament in Rome.

"I'll stay in office if all goes according to plan until April 2013, and I hope that I can help rescue Italy from financial ruin with moral support from some European friends, especially Germany," he said.

Monti, whose popularity has plunged from record high levels soon after he took office, has said he will not seek to remain in office after a national election due next spring.

He won a procedural vote of confidence in the Chamber of Deputies on Tuesday to limit debate on and accelerate the passage of a bill for additional spending cuts worth some 4.5 billion euros this year.

The savings will help rein in the deficit and delay a planned 2 percentage point increase in sales tax until at least July of next year.

A Reuters survey of analysts last month forecast that the budget deficit this year would be 2.3 percent of GDP, compared with Monti's 1.7 percent target, and 1.3 percent in 2013, when the government forecasts a 0.5 percent shortfall.

ISTAT gave no numerical breakdown of GDP components with its preliminary estimate, saying only that activity contracted in agriculture, industry and services.

ISTAT said so-called "acquired growth" at the end of the first quarter stood at -1.9 percent.

This means that if GDP posts flat quarterly readings in the final two quarters of 2012, over the wholeyear it will be down 1.9 percent from the previous year.