The 2.3 percent annual decline in exports was slightly less than economists' median forecast of a 3.0 percent annual drop, in a troubling sign for Japan's recovery from a devastating earthquake, tsunami and nuclear disaster last year. 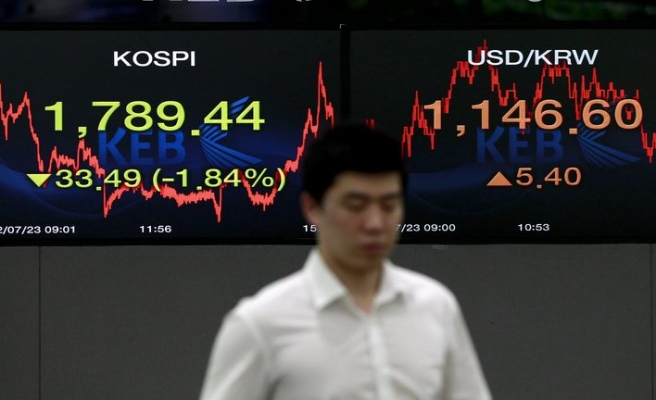 Japan's exports fell in June from a year earlier, the first decline in four months, as a slowdown in Europe, China and other emerging markets weighed on demand for Japanese goods.

The 2.3 percent annual decline in exports was slightly less than economists' median forecast of a 3.0 percent annual drop, in a troubling sign for Japan's recovery from a devastating earthquake, tsunami and nuclear disaster last year.

Japan's domestic demand, fueled by reconstruction and a pick-up in consumer spending, has supported growth for much of this year but weakening overseas demand could slow the economy, bolstering the case for new policy steps to support growth.

"Exports remain sluggish and you can't expect much from external demand to drive the Japanese economy in the latter half of this fiscal year (to next March) when private consumption is likely to lose momentum as subsidies for low-emission cars run out of money," said Yasuo Yamamoto, a senior economist at Mizuho Research Institute.

"I don't think the Japanese economy is sliding back into recession, but that possibility cannot be totally ruled out
depending on developments in Europe's crisis and slowdown in the U.S. and Chinese economy," he said.

The trade balance in June swung to a surplus of 61.7 billion yen ($788.80 million) against a projected deficit of 135.0 billion yen as imports fell an annual 2.2 percent due to a decline in oil prices.

The decline in imports was the first in 2-1/2 years and compares with the median forecast for a 1.2 percent annual
increase.

Japan recorded its biggest ever trade deficit of 1.48 trillion yen in January.

Exports to Europe in June tumbled by 21.3 percent from a year earlier, the fastest decline since a 29.0 fall in the year to October 2009 as Europe's sovereign debt crisis takes its toll.

Exports to China, Japan's largest trading partner, fell 7.3 percent in the year to June, the biggest decline since a 14.0 percent annual fall in February, due to lower shipments of steel and heavy machinery.

Japan's economy is still expected to outperform most other developed nations this year thanks to solid domestic demand, but analysts have slashed forecasts for factory output as the global slowdown becomes more pronounced, according to a Reuters poll conducted earlier this month.

Japan's economy, the world's third-largest, is set to grow 2.2 percent in the year to next March, according to a Reuters poll of economists, slightly slower than the 2.3 percent pace seen in a similar survey in June.

China's economy is expected to recover modestly in the third quarter after marking its slowest pace of growth in three years in the second quarter as Europe's sovereign debt crisis weighed on exports.

There are growing worries that Spain may have to seek a bailout following media reports that half a dozen regional
governments could request state aid to pay off their debts.