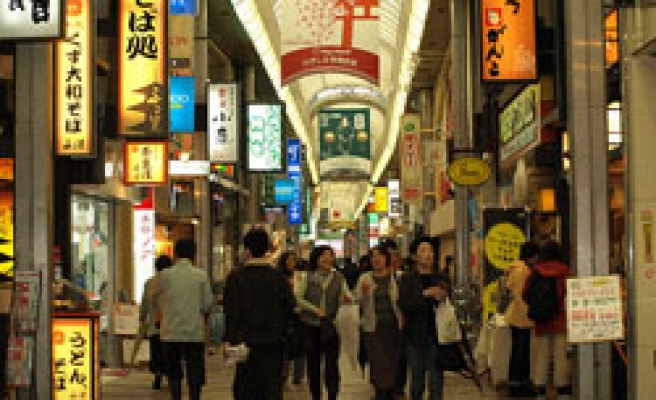 Japan's economic growth slowed to a crawl in the second quarter and analysts see more weakness ahead, adding to policymakers' headaches as they grapple with deflation and a rise in the yen that threatens an export-reliant recovery.

Slowing growth in main export destinations such as the United States and China clouds the outlook, while policymakers are trying hard to talk down the yen after it surged to a 15-year high against the dollar last week.

Japan's quarterly gross domestic product growth of 0.1 percent translates to annualised expansion of 0.4 percent, well below the median market forecast of 2.3 percent and the United States' 2.4 percent annualised growth in the same quarter.

That followed revised 4.4 percent annualised growth in the first quarter, when both exports and a stimulus-driven recovery in consumption contributed to overall growth.

In the April-June quarter the stimulus effects have worn off, leaving exports as the sole engine of growth and with its contribution to growth halved to 0.3 percent, the economy just eked out a third straight quarter of expansion.

Prime Minister Naoto Kan and Bank of Japan Governor Masaaki Shirakawa are expected to meet later this week to discuss the yen's strength and possible responses, although analysts said there is not much they can do.

"I think the Bank of Japan and the government need to take decisive action against currency moves. Solo currency intervention is possible if the yen approaches 80 to the dollar. If that is accompanied by monetary easing by the Bank of Japan, it may have a certain effect," said Takeshi Minami, chief economist at Norinchukin Research Institute in Tokyo.

The latest figures put China ahead of Japan as the world's second-largest economy for the quarter on a nominal dollar basis, said Keisuke Tsumura, a parliamentary secretary at the Cabinet Office. He added, however, that one should wait for full-year figures before changing the rankings.

"Since we have different calculations for seasonal adjustments, it would be correct and fair to compare the figures for the whole year," Tsumura said.

"The economy may enter a lull late this year or early next year, or even stagnate," said Yoshiki Shinke, senior economist, Dai-Ichi Life Research Institute.

"Much depends on the performance of overseas economies."

Analysts added that the rise in the yen, which climbed to 84.72 per dollar, may begin to pinch export growth in the latter half of the fiscal year to next March.

Kan has expressed concern about the yen's strength and government sources said he may meet the central bank governor as early as this week to discuss the matter.

Late last year, the last time the yen strengthened beyond the 85 yen mark, the BOJ called an emergency meeting and announced a 3-month funding scheme, a day before Shirakawa met with then-Prime Minister Yukio Hatoyama.

The yen has risen steadily against the dollar since early May, gaining more than 10 percent and closing in on its 1995 record high of 79.75 per dollar, prompting markets to speculate that Tokyo might take action.

But currency market intervention is seen as difficult, whether jointly or alone, although market players say the risk of solo action increases the closer the yen gets to 80 per dollar and if its rise accelerates to a pace of 2 to 3 yen per day.

Investors see a monetary policy response from the BOJ as more likely than currency intervention.

Signs of a faltering economy put more pressure on Kan ahead of his party's leadership vote next month in which he may face a challenge from powerbroker Ichiro Ozawa or a proxy, either of whom would be less keen to forge ahead with fiscal reform.

Japan's recovery has been spotty since emerging from its worst recession since World War Two in mid-2009, relying heavily on exports, particularly to Asia, and government stimulus for spending on energy-efficient cars and electronics.