Kazakhstan's leader on Tuesday proposed the resurrection of a Soviet-era project to divert Siberian rivers southward to provide drinking water for drought-hit regions of Central Asia. 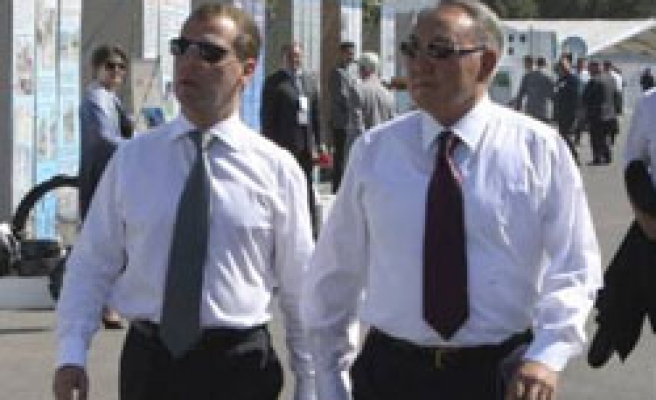 Kazakhstan's leader on Tuesday proposed the resurrection of a Soviet-era project to divert Siberian rivers southward to provide drinking water for drought-hit regions of Central Asia.

President Nursultan Nazarbayev said the plan to divert water resources from Arctic-bound rivers, which was abandoned by the Soviet Union in the 1980s, would equip both Kazakhstan and Russia with the means to overcome future droughts.

"Unfortunately, the issue of water supply is not receiving the attention it merits. Nature has decided to remind us of this fact," Nazarbayev said after meeting Russian President Dmitry Medvedev in the eastern Kazakh city of Oskemen.

Russia's worst heatwave on record has destroyed crops on an area the size of Portugal and is expected to cut economic growth this year and push inflation above target levels. Western regions of Kazakhstan have also suffered from drought.

"It's imperative that we set our governments the task of taking joint measures to find a solution to these problems," Nazarbayev said.

"For example -- as we discussed yesterday and today -- why not revisit the project to divert water from Siberian rivers to the southern region of Russia and Kazakhstan?"

He said such a project could become "major and essential for the provision of drinking water for the entire Central Asian region."

Longtime Central Asian leaders, including Nazarbayev, have periodically resurrected talk of the scheme to divert Siberian rivers to irrigate arid farmland and provide drinking water in their arid ex-Soviet republics.

Russia holds approximately a fifth of the world's fresh water. It has several major Siberian rivers that flow northward including the Ob, Irtysh and Yenisei, whose sources are in or near Kazakhstan.

Water supply is of growing concern in a world where, according to data quoted by the head of Russia's presidential security council last month, the volume of fresh water consumed worldwide will equal reserves some time between 2035 and 2045.

Nikolai Patrushev, head of Medvedev's security council, said in an August interview with official daily Rossiiskaya Gazeta that wasteful use of water posed a threat to national security.

He said that, over the past decade, the threat of armed conflict over scarce water reserves had reached a critical point in 46 nations with a combined population of 2.7 billion. He named Central Asia among the high-risk regions.

Central Asian states have quarrelled over plans by the region's mountainous republics, Tajikistan and Kyrgyzstan, to dam rivers for hydroelectric power generation, thus controlling supplies downstream to fields in Uzbekistan and Kazakhstan.

"Attempts to resolve water issues locally, in specific regions, do not have the desired effect," said Nazarbayev, who has ruled Kazakhstan since independence from the Soviet Union.

Medvedev, responding to Nazarbayev's proposal, said: "We are open to discussing ideas, including some ideas from the past that had been gathering dust."