Libyans seeking hard currency are now rushing to the parallel market, which has become an unofficial benchmark for the exchange rate 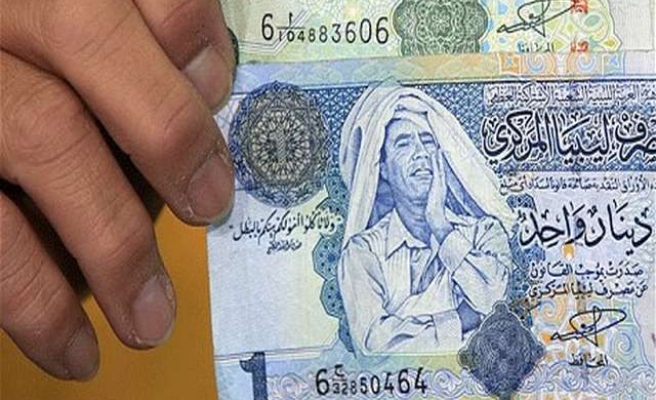 Libya's currency is under heavy pressure as a breakdown in security and a collapse of oil revenues due to port blockades have badly disrupted public finances and an economy already burdened by exploding state salary and subsidy bills.

Over the past two months, the dinar has fallen more than seven percent against the dollar on the black market, its first weakness since rebels demanding autonomy for eastern Libya seized oil export facilities 10 months ago.

Now, even private importers say the dinar's stronger official exchange will have to be devalued as revenue from crude all but dries up, although the central bank insists it can hold the line thanks to large foreign currency reserves.

Compounding the financial problems, a wave of bank robberies has made the central bank reluctant to supply commercial lenders with hard currency, exacerbating shortages of dollars in some parts of the economy and further undermining the dinar.

Some insurance companies have also become less willing to provide cover for cash shipments of dollars from the central bank's overseas accounts to Libya for security reasons.

Libyans seeking hard currency are now rushing to the parallel market, which has become an unofficial benchmark for the exchange rate. There a dollar buys 1.40 dinars compared with 1.35 two weeks ago and 1.30 in early April, dealers say.

Business leader Husni Bey said the central bank was still supplying importers with enough dollars, despite a collapse in oil production to 150,000 barrels per day (bpd) from 1.4 million last July before the blockade began - with part of the tiny remaining output needed for domestic refineries.

But he told Reuters that the official rate - which the central bank fixes in a band against major currencies and has held steady throughout the crisis at around 1.25 to the dollar - is overvalued regardless of the blockade.

"The Libyan dinar should be devalued in stages to a more realistic level even if full oil exports are resumed at 1.6 million bpd," said Bey, who is chairman of HB Group, one of Libya's largest private conglomerates which sells imported Western consumer goods.

The loss of oil revenues has forced the central bank to dip into its reserves to fund a $50 billion budget which goes mainly on price subsidies and civil servants' pay.

Any spending cuts would be hugely unpopular with Libyans, used to bread costing two U.S. cents and filling up their cars for less than $5, as well as free health care and education.

Libya, a country of 6 million, has 1.5 million civil servants, a legacy of rule by Muammar Gaddafi who before his overthrow in a 2011 civil war put adults on the payroll in the hope of discouraging opposition.

Bey said state spending was exploding with the bill for public salaries up 250 percent since 2010 - as Libya's new rulers use similar tactics to ease social tensions and pay off the militias that brought down Gaddafi and now largely control the streets.

Libya also needs hard currency for annual imports worth $30 billion. With no sizeable food production, even basic products such as milk, mineral water and vegetables are shipped from Europe, Tunisia or Turkey.

The central bank has blamed currency speculators for the dinar's drop, insisting Libya can hold out for three and a half years without oil income thanks to foreign reserves exceeding $100 billion, accumulated during years of high oil prices.

When asked whether the central bank would consider a devaluation, spokesman Musbah Alkari said: "We don't plan to lower or increase the value of the dinar."

The central bank - one of the few respected state institutions left after four decades of one-man rule by Gaddafi followed by chaos since the uprising - has ruled out a currency devaluation.

But Governor Sadiq al-Kabir warned last week that Libya had earned only 4 billion dinars from energy exports between the New Year and end of April, less than a quarter of the budgeted 18 billion. "The amount of four billions doesn't even pay the (state) salaries," he said in a statement.

With a quarter of Libyans on the state payroll, his deputy Ali Mohamed El-Hebri hammered home a message that change was needed, saying the country had added 400,000 civil servants since the civil war. "Based on international standards the ratio should be 8 to 10 percent of the total population," he said.

The central bank has tried to avoid burning through the foreign reserves which have nevertheless fallen to $110 billion from $132 billion last summer.

Since lawmakers have failed to approve a budget in the absence of fresh oil money, the central bank has granted 12 billion dinars to parliament since January to keep the country running, according to the budget committee.

A Western diplomat said part of the central bank reserves were invested in long-term overseas assets such as equity stakes. "It's not all cash readily available. They can't run the country for two years on central bank money," he said. "There is also a huge maintenance bill waiting as the oil fields stand idle. It would take a long time to restart production."

The central bank's attempts to preserve reserves has caused friction with the government and parliament, which wants funds to keep paying public salaries. Outgoing premier Abdullah al-Thinni has accused Kabir of acting like "Libya's absolute ruler" by blocking spending even when it had been approved.

Matters were complicated last week when Thinni refused to hand over power to the cabinet of his successor Ahmed Maiteeq, leaving open the question of which minister can instruct the central bank to release funds.

While diplomats agree the central bank can hold out for a while by burning though reserves, the surge of robberies poses an immediate threat to the banking system.

Almost every week gunmen rob bank vans or storm branches to force staff to open safes. An employee at state-owned Jumhuriya bank was shot dead in the southern city of Sabha in April.

That has made the central bank reluctant to move dollars to commercial banks, and several clients told Reuters they could withdraw money from their dollar accounts only in dinars at the unfavorable official exchange rate.

Even dinars can be in short supply, with banks outside the capital Tripoli sometimes complaining they go for days with no banknotes in their safes.

"The problem of the lack of liquidity at commercial banks is because of a lack of safe transport," Kabir said. "The central bank has asked the legislative authority to secure these money (shipments) to commercial banks but to no avail."

Libya's police and army are no match for the battle-hardened militias who, officials say, often work with accomplices in regular forces who tip them off when a van leaves the central bank or a plane loaded with banknotes arrives at a provincial airport.

Bey said some commercial bank staff were working with black market traders to hold back dollars through the regular bank channels. "The present premium paid for the cash in the parallel market is due to manipulation, abuse and connivance between black marketeers and bank employees," he said.