The refinery's capture was seen as a strategic blow to Gaddafi's forces, which had relied on the plant for fuel. 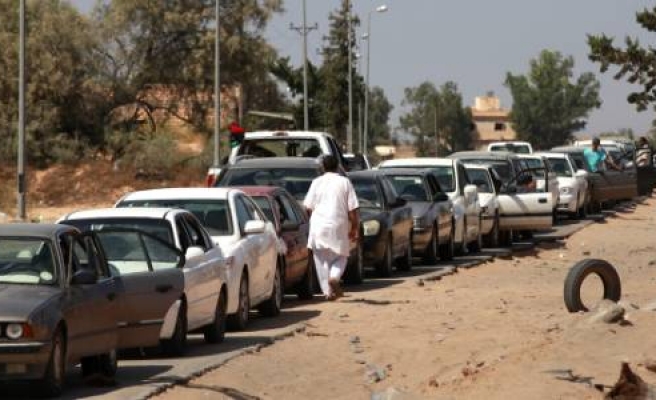 Libyan rebels sought to ease fuel shortages in their newly won territory west of the capital Tripoli on Saturday, releasing stockpiles from a refinery they seized from Muammar Gaddafi's forces three days ago.

Heavy fighting for Zawiyah, a strategic city on the coastal highway 50 km (30 miles) west of Tripoli, cut off regular deliveries for several days but truckloads of fuel have now arrived at petrol stations around the area.

Drivers formed long queues to refuel at petrol stations adorned with rebel flags. "We are free, we are free," shouted one driver, Fawzi Qabas, as he waited hours to refill.

"Today for the first day we got 40,000 litres from the refinery in Zawiyah," said Bashir, who runs a petrol station on the main road from Zawiyah to Sabratha further west.

"I drove our fuel truck to the refinery to refill. Supplies are fine now," he said, showing two full underground tanks at his petrol station decorated with rebel flags.

The refinery's capture was seen as a strategic blow to Gaddafi's forces, which had relied on the plant for fuel.

Rebels have extended their control over Zawiyah, but pro-Gaddafi forces continue to shell parts of the city and are expected to launch counter-attacks to retake it.

Many residents had stayed indoors for days as fighting dragged on in the city and several other parts of the coastal strip in the past few days.

For many, being able to get out and buy fuel seemed a relief.

"I waited four hours but finally we now have petrol," said Mohammed, a driver at the top of a two-lane queue stretching back for a kilometer.

Rebels said the refinery was not running when it was captured from Gaddafi forces on Wednesday, but added that it appeared largely undamaged as most of the fighting inside the complex was with light weapons.

At another petrol station near Zawiyah, staff tried to fix the fuel pump while drivers waited in scorching heat on the main road.

"I am sure Gaddafi forces destroyed the pump when they retreated," said Mahmoud Jumaa, a driver. "They want to destroy the Libyan people."