Official data show that in the first half of 2013, around 550,000 foreign and local tourists visited Mardin, a city in southeastern Turkey and a popular spot for tourism that boasts rich historical and cultural diversity 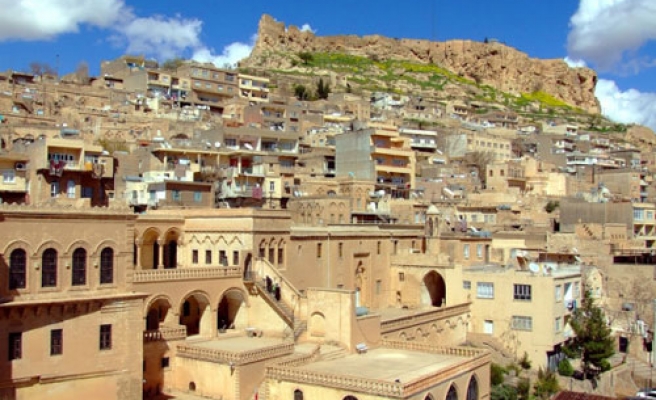 Prominent Mardin locals agree: The government's settlement process on the Kurdish issue is lifting the city in the eyes of tourists from Turkey and all over the world. Official data show that in the first half of 2013, around 550,000 foreign and local tourists visited Mardin, a city in southeastern Turkey and a popular spot for tourism that boasts rich historical and cultural diversity.

Mardin is home to a host of important historical sites and counts architecture as a principal draw for visitors.

The Ulu (Great) Mosque, the Deyrulzafaran Monastery, the Meryemana (House of the Virgin Mary) Church, Islamic theological schools like the Zinciriye Medresesi and Kasımiye Medresesi, the Kırklar Church and the Mardin Museum are among sites worth visiting in the city.

Mardin Culture and Tourism Director Davut Beliktay linked the visits of 550,000 tourists in the first half of 2013 with a government initiative to bring lasting peace to the country.

“Mardin saw a 16 percent jump in tourism in the first half of 2013 that was mostly due to the ongoing settlement process launched by the Turkish government in a bid to resolve the country's long-standing conlict between the PKK and state.” Beliktay added that this number would increase to over a million by year's end. Hotel occupancy rates in the historic city are currently at between 70 and 80 percent, and even more rooms are booked for the feast at the end of Ramadan, Eid al-Fitr.

All the hotels in the city will be fully booked at the end of September, the official predicted.

Local tourists to the city hail mostly from the Aegean and Marmara regions of Turkey, but visitors from Italy have been the most numerous in 2013, followed by British and American tourists.

The governor of Mardin province, Ahmet Cengiz, said: “Mardin city, because of its historical and cultural diversity, is on its way to becoming an important world brand. Because of the settlement process that is currently going on in Turkey, the tourism potential of the city has increased, and this settlement process has led to an increase in tourists visiting the city.”

Cengiz added, “People are now thinking that the city is safer than it used to be, and they are coming to our city to see its historical and cultural richness. And many businessmen have also been investing in the city, opening 16 hotels, including boutique hotels, and 28 hostels. … In the last five years more than TL 400 million in tourism investment has made in the city.”

Chairman of the Association of Tourism and Hotels Özgür Gürgör said: “This year we are expecting a significant rise in tourists visiting the city, and the number of people who visit the city will rise to over 2 or 3 million people in the coming years because of the settlement process, which has already helped boost the number of local and foreign tourists.”

Mardin has stepped up restoration efforts in advance of a new application to be inscribed in 2014 on the coveted list of UNESCO World Heritage sites. The Mardin Municipality has been working hard in recent years to transform the city into its former self from 100 years ago, and within this context 700 buildings will be demolished under a historic transformation project supported by the Ministry of Culture and Tourism.