Parliament on Thursday approved a package of 65 billion euros ($80 billion) of spending cuts and tax hikes as part of measures to avert a full European bail-out, bringing more hardship in a severe economic downturn. 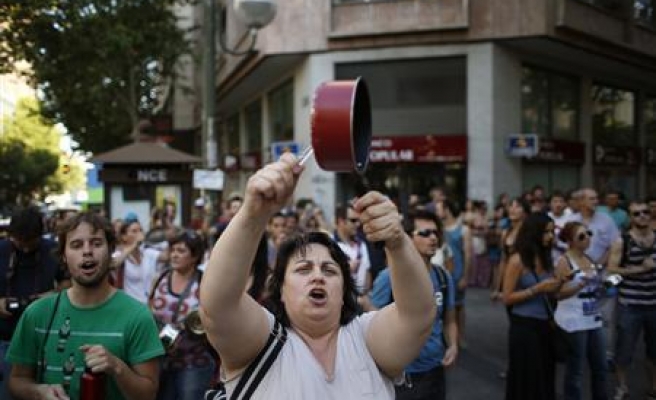 Hundreds of thousands of Spaniards marched against the centre-right government's latest austerity measures on Thursday evening, following more than a week of demonstrations across the country.

Parliament on Thursday approved a package of 65 billion euros ($80 billion) of spending cuts and tax hikes as part of measures to avert a full European bail-out, bringing more hardship in a severe economic downturn.

Demonstrators took to the streets in towns and cities across Spain, thronging the thoroughfares of Madrid and Barcelona, waving flags and bearing banners decorated with scissors to symbolise spending cuts.

In Madrid, crowds of firemen wearing helments and t-shirts with the slogan "Firemen in danger of extinction" blew horns and let off firecrackers. Earlier, policemen and members of the Civil Guard joined the protests.

"We have lived through bad times, but this takes the biscuit," said 58-year-old fireman Francisco Vaquero.

The sight of demonstrators on Spain's streets is nothing new. Young "Indignados" (Indignants) protested in their thousands against unemployment last year. One in four Spaniards is without work.

But since Prime Minister Mariano Rajoy announced spending cuts and tax rises last week there have been daily demonstrations drawing protests from public service workers like police that have previously stayed away.

Civil servants, whose pay was cut by up to 7 percent when their Christmas bonus was cancelled, have used their coffee breaks this week to protest outside the ruling People's Party (PP) headquarters in Madrid.

"We have to make some noise, because they're making fun of us and of all working people," said Iria, 34, an auditor in the treasury, during a rally outside the PP building on Wednesday.

Public workers up to now had accepted several cuts or freezes in their salaries over the last three years with a sense of resignation. But the latest round of belt-tightening has spurred widespread anger.

"It has gone beyond an ideological issue ... and it's moved beyond the traditional groups that demonstrate. We have seen even the military threatening a demonstration," said Ramon Pacheco, a lecturer in Spanish politics at Kings College London.

Rajoy announced the cuts as thousands of miners and supporters, some of whom had marched hundreds of kilometres (miles) from northern Spain to protest against a reduction in coal subsidies, staged a rally that ended with police firing rubber bullets and making arrests.

Civil servants poured out of their offices to block Madrid's main arteries following Rajoy's announcement and have protested every day since, organising action through emails and by co-ordinating at work without any clear leaders.

On Friday, the Indignados turned out in support of the civil servants, a sign that disparate groups with different complaints are uniting in a common cause. That protest ended with scuffles between police and protesters in Madrid's Puerta del Sol, the centre of last year's protest movement.

RISKS FOR THE GOVERNMENT

Messages on social networks like Twitter and mobile messaging service WhatsApp call for impromptu demonstrations that attract hundreds of people in various cities every day.

One message doing the rounds urges citizens to gather in the main squares of their cities on July 27 and says: "The Spanish people are sick of all politicians. Let's make history!"

The cabinet on Thursday approved a parliamentary motion categorising "urban violence" as a specific crime, which could empower police to detain suspects preventively before being charged with the offence.

The party has more than three years of its term left, but analysts warn that if the crisis continues to escalate, Rajoy will be threatened.

"It's difficult to make predictions, but it's more than likely that this government term could come to an end sooner than expected," said Fermin Bouza, a sociologist at Madrid's Complutense University.