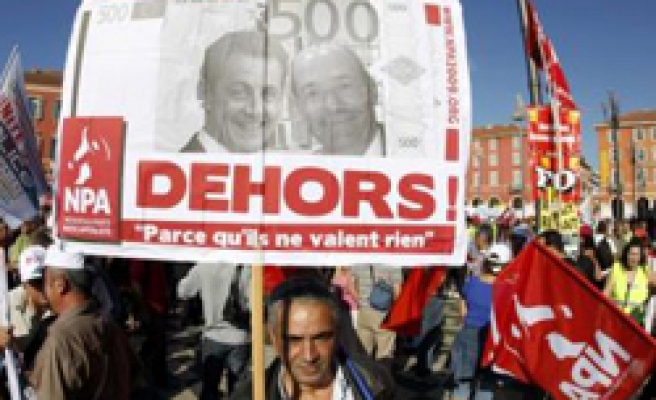 French trade unions launched the second 24-hour strike in a month on Thursday against President Nicolas Sarkozy's unpopular pension plan, seeking to force him to reverse plans to raise the retirement age to 62 from 60.

The walk-out began on Wednesday evening on several intercity train lines, stranding some passengers in stations, and expanded to slow morning commuter traffic around the country. Most international air and rail links were not affected.

French unions and the left-wing opposition say the plans to raise the retirement age to 62 by 2018, raise civil servants' contributions to private sector levels and make people work longer for a full pension are unjust.

They will be harshest on those who start work young or do physically exhausting jobs, and on women who take career breaks to have children and will have to work till 67 for a full pension.

Unions said 2.5-2.7 million protested around France on Sept. 7, while police estimated the number at 1.1 million -- amounting either way to a significant turnout.

Millions of strikers paid no heed

Labour Minister Eric Woerth, in charge of steering the bill through parliament, vowed to press ahead regardless, telling reporters on Wednesday: "We haven't changed. We are very firm on the core of the reform, which is (the retirement) age."

The unrest mirrors action elsewhere in Europe as indebted governments cut back on spending, notably in Greece and Spain, where more protests loom in the next two weeks in response to some of the harshest austerity measures in the euro zone.

Widespread disruption was expected in schools and other public services while unions hoped the huge turnout they expect for street protests would top the demonstrations on Sept. 7.

"The number of demonstrators will be decisive for the future of the movement," Francois Chereque, head of the big CFDT union, told RMC radio, adding that more protesters were expected in Paris this time.

Up to 50 percent of flights were cancelled at airports in the capital and other cities, airport authorities said.

Train services were cut by half or more, while Eurostar rail links to Britain were running normally and other international links were close to normal, the state railway said. The Paris metro ran at about three-quarters of normal service.

The lower house of parliament adopted the bill last week but it still has to go through the Senate, which is due to debate the measure next month. The ruling centre-right parties have a majority in the upper house too, but some conservative senators have said they will seek to amend the bill.

Socialist party leader Martine Aubry urged supporters not to give up, highlighting that mass protests had forced a previous conservative government to withdraw a low-wage youth employment contract in 2006 even after parliament had adopted it.

"We are told 'there's no point, retirement at 60 is dead'. It's not dead," she told Socialist lawmakers on Wednesday. "We will throw all our force into the battle because pension reform is a battle for justice and for the republic."

Trade union leaders will decide how to take forward their struggle based on the scale of Thursday's protests.

Some, such as Force Ouvriere and the radical Sud Rail, want to call rolling strikes over several days to build pressure on the government to yield when the bill comes to the Senate.